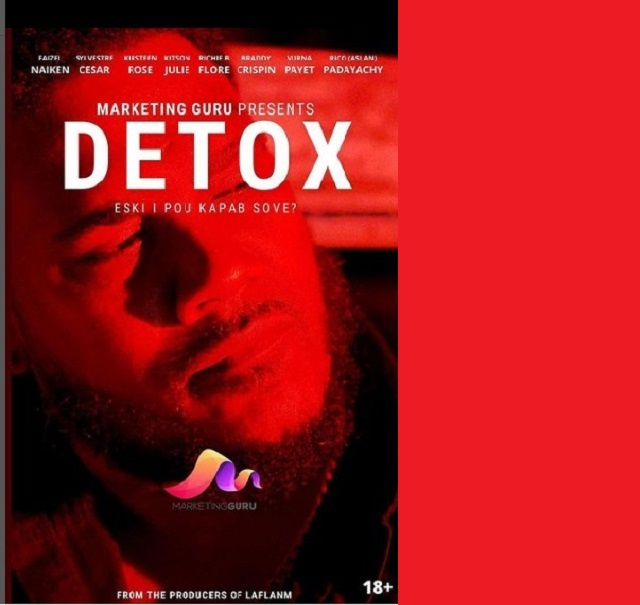 'Detox' film poster for the premiere on Wednesday (Marketing Guru)

(Seychelles News Agency) - The latest locally-made movie from film-makers Albert Duncan and Rico Padayachy will premiere on Wednesday, August 31, at the Deepam Cinema in Seychelles' capital of Victoria.

Titled ‘Detox’, the 40-minute film tells the story of a single father and the lengths he goes to in trying to help his child to get rid of a drug addiction.

The film has been created and directed by Duncan, who has previously released the TV series, ‘Laflanm’, which was well-received locally.

“The reason we chose to tackle this subject in our movie, is because we know Seychelles has a high percentage of drug and alcohol abuse, and our aim is to bring this issue forward and raise awareness, which can help our younger generation to not get tangled up in substance abuse,” said Duncan.

He has once again teamed up with the production team Marketing Guru, led by Padayachy for this film, which features a number of recognised names, that have appeared in their previous works. ‘Detox’, features actors such as Faizel Naiken, Vurna Payet, Kitson Julie and Braddy Crispin.

Padayachy explained that it has taken them a lot of work to make this movie.

“We received a sponsor from the National Arts and Culture Fund (NACF) to help make this movie, but we have had to dip in our own pockets to ensure that we could get it done, which was a really hard process,” said Padayachy.

He added that they have had to invest in a lot of equipment, along with the costly logistics, as well as scheduling shoots, especially since the actors have other full-time jobs and priorities.

The premiere of the film will be preceded by a cocktail, while fans will also get the chance to meet the producers and actors in an after party on Saturday at the Backstage bar and restaurant.

At the moment, it is not confirmed how the film will be made available to the public after the premiere, with Seychelles having only two TV stations that can show the film, while Deepam Cinema also has its obligations to screen Hollywood films.

“We will be negotiating with the TV stations to see if it can be screened, but that is also a problem for us as it is difficult for us to get a revenue from such works locally, with limited places show our work,” Padayachy stated, saying that they also need help to be able to send their work in the region or on the continent.

Padayachy has also expressed his disappointment that there is not enough support towards filmmaking in the Seychelles and is urging those concerned to help bring this industry forward.

“Our movie is not perfect,” he said, before adding; “it is not perfect because we are working in a team of only five people, compared to the hundreds it takes to make big films overseas, so we do feel that we need to be supported so that we can keep improving and giving a better quality product in the future,” he said.

With such difficulties in making local movies, the makers of ‘Detox’, have said that at the moment they cannot confirm any future projects, but they are urging those wishing to help them out and play a role in growing the country’s film industry to get in touch with them and that they will be sharing a GoFundMe page soon, where anyone interested can make a contribution to help them create more movies and TV shows.