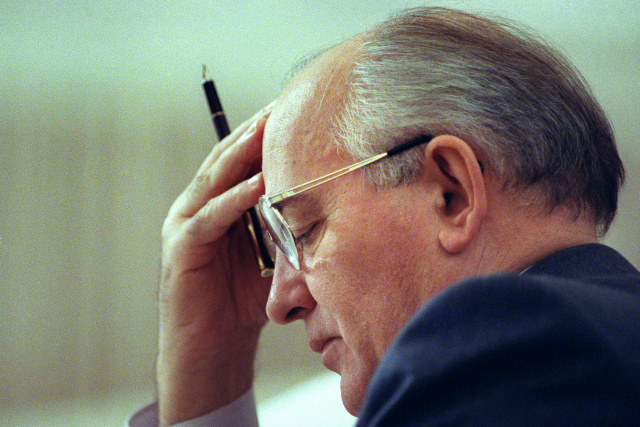 (FILES) In this file photo taken on November 20, 1990 Soviet President Mikhail Gorbatchev looks in deep thoughts during the meeting of the 2nd day of the CSCE (Commission on Security and Cooperation in Europe) summit held at the international conference center in Paris. The last leader of the Soviet Union, Mikhail Gorbachev, died on August 30, 2022 at the age of 91 in Russia, said a hospital quoted by Russian news agencies. (Photo by JEAN-LOUP GAUTREAU / AFP)

The man who played a major role in ending the Cold War was praised for being a "rare leader" who helped change the course of world history.

President Vladimir Putin said Gorbachev "was a politician and statesman who had a huge impact on the course of world history," expressing "deepest condolences" to his friends and family.

"He led our country during a period of complex, dramatic changes," Putin added.

"He deeply understood that reforms were necessary, he strove to offer his own solutions to urgent problems."

Russian winner of last year's Nobel Peace Prize, Dmitry Muratov, hailed his fellow Nobel laureate as someone who "put human rights above the state, and valued a peaceful sky more than personal power."

"He despised war," he said. "He gave both the country and the world an incredible gift -- he gave us thirty years of peace. Without the threat of global and nuclear war."

President Joe Biden hailed a "rare leader... one with the imagination to see that a different future was possible and the courage to risk his entire career to achieve it."

"The result was a safer world and greater freedom for millions of people," Biden said.

President Frank-Walter Steinmeier said Germany was "bound in gratitude with him for his decisive contribution to German unity".

Chancellor Olaf Scholz hailed Gorbachev's role in reuniting Germany but lamented he had "died at a time in which democracy has failed in Russia".

Angela Merkel, the former chancellor who grew up in East Germany, said Gorbachev had "fundamentally changed my life" and showed how "one single statesman can change the world for the better".

"His desire for peace, his opposition to an imperialist vision of Russia won him the Nobel (peace) prize," Prime Minister Mario Draghi said.

"These messages are all the more current in the face of the tragedy of the invasion of Ukraine."

"A one-of-a-kind statesman who changed the course of history" and "did more than any other individual to bring about the peaceful end of the Cold War", UN chief Antonio Guterres said in a statement.

His "crucial role" in bringing down the Iron Curtain and ending the Cold War left a legacy "we will not forget."

Secretary general Jens Stoltenberg said Gorbachev's "vision of a better world remains an example" and paid tribute to his "historic reforms... (which) opened the possibility of a partnership between Russia and NATO".

Beijing paid tribute to Gorbachev for making "positive contributions to the normalisation of Sino-Soviet relations".

"In a time of Putin's aggression in Ukraine, his tireless commitment to opening up Soviet society remains an example to us all."

President Emmanuel Macron described Gorbachev as a "man of peace" who "opened a path of liberty for Russians. His commitment to peace in Europe changed our shared history".

The Norwegian Nobel Committee said Gorbachev was awarded the Peace Prize in 1990 for his "leading role in the process which led to the peaceful ending of the Cold War... including important arms control and international trust-building initiatives."

The committee praised him for bringing "greater openness in Soviet society and allowing the people of Eastern Europe to regain their freedom."

"Mikhail Gorbachev was one of the 20th century's most extraordinary figures," President Isaac Herzog said, calling him a "brave and visionary leader."

Foreign Minister Ann Linde said Gorbachev inspired her in her youth, offering "a hope for another future away from the repression and Cold War".

"So immensely sad the present leader is taking the opposite way," she wrote on Twitter.