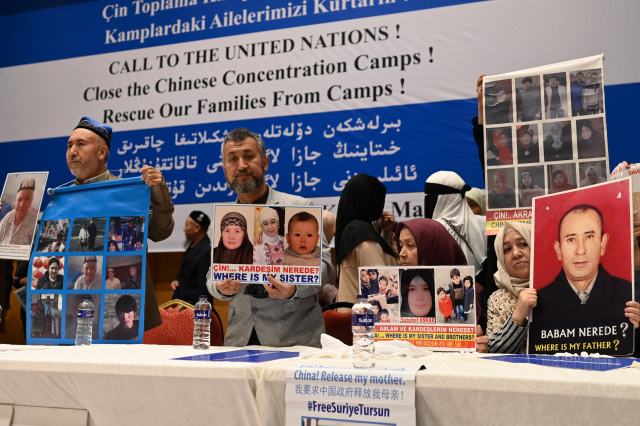 (FILES) In this file photo taken on May 10, 2022, members of the Muslim Uyghur community present pictures of their relatives detained in China during a press conference in Istanbul. The United Nations released a bombshell report late on August 31, 2022 into serious human rights abuses in China's Xinjiang region, saying torture allegations were credible and citing possible crimes against humanity. (Photo by Ozan KOSE / AFP)

The long-awaited report detailed a string of rights violations against Uyghurs and other Muslim minorities in the far-western region, but made no reference to genocide: one of the key allegations made by the United States and other critics.

"The extent of arbitrary and discriminatory detention of members of Uyghur and other predominantly Muslim groups... may constitute international crimes, in particular crimes against humanity," the report said.

It said the world must now pay "urgent attention" to the human rights situation in the Xinjiang.

The assessment brings the UN seal to many of the allegations about China's treatment of people in Xinjiang that have long been made by rights groups, Western nations and the Uyghur community in exile.

Michelle Bachelet, the UN human rights chief, decided that a full assessment was needed of the situation inside the Xinjiang Uyghur Autonomous Region (XUAR).

The report was in the making for around a year and its release was bitterly opposed by China.

Bachelet was determined to release it before her four-year term as the UN high commissioner for human rights expired at the end of August -- and did so with 13 minutes to spare at 11:47pm in Geneva.

"I said that I would publish it before my mandate ended and I have," Bachelet said in an email sent to AFP on Thursday.

"The politicisation of these serious human rights issues by some states did not help," she added.

China has been accused for years of detaining more than one million Uyghurs and other Muslims in the region.

Beijing has vehemently rejected the claims, insisting it is running vocational centres designed to curb extremism.

"Serious human rights violations have been committed in XUAR in the context of the government's application of counter-terrorism and counter-'extremism' strategies," the UN report said.

The assessment raised concerns about the treatment of people held in China's so-called "Vocational Education and Training Centres" (VETCs).

"Allegations of patterns of torture or ill-treatment, including forced medical treatment and adverse conditions of detention, are credible, as are allegations of individual incidents of sexual and gender-based violence," the report said.

The UN Human Rights Office could not confirm how many people were affected by the VETCs but concluded that the system operated on a "wide scale" across the entire region.

The number in the VETCs, at least between 2017 and 2019, "was very significant, comprising a substantial proportion of the Uyghur and other predominantly Muslim minority populations".

Campaigners have accused China of practicing forced sterilisation of women.

The report said there were "credible indications of violations of reproductive rights through the coercive enforcement of family planning policies".

China's mission in Geneva hit out at the report and maintained its firm opposition to its release.

"Based on the disinformation and lies fabricated by anti-China forces and out of presumption of guilt, the so-called 'assessment' distorts China's laws and policies, and wantonly smears and slanders China, and interferes in China's internal affairs," it said.

Non-governmental organisations and campaign groups said the report should act as a launchpad for further action.

The UN Human Rights Council should now investigate China's alleged crimes against humanity "and hold those responsible to account", she said.

She echoed the call for criminal accountability and said China "must immediately release all individuals" arbitrarily detained in camps, "end the persecution" of minorities and allow investigators in unfettered.

"This is a game-changer for the international response to the Uyghur crisis," said Uyghur Human Rights Project executive director Omer Kanat.

"Despite the Chinese government's strenuous denials, the UN has now officially recognised that horrific crimes are occurring."