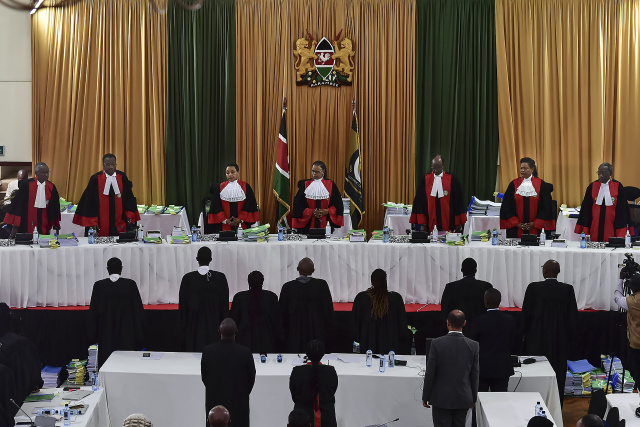 Kenya's Supreme Court judges led by Chief Justice Martha Koome (C) flanked by her deputy, Philomena Mwilu (2nd L) and judges (from L-R) Isaac Lenaola, Smokin Wanjala, Mohamed Ibrahim, Njoki Ndung'u and William Ouko arrive to begin hearing the day's submissions from counsel representing president-elect William Ruto at the Supreme Court of Kenya in Nairobi on September 1, 2022, where the result of the national poll is being challenged by the Raila Odinga led Azimio political coalition. The apex court ruled that the votes cast in at least 14 out of around 46,000 polling stations be inspected, scrutinised and recounted and acknowledged that it had identified nine issues to determine the outcome of petitions challenging the result of the August 9, 2022 presidential election, including whether any irregularities were substantial enough to nullify the poll. (Photo by Tony KARUMBA / AFP)

(AFP) - Kenya's Supreme Court is set to rule Monday on the outcome of the nation's August 9 presidential battle after defeated candidate Raila Odinga filed a legal challenge over the results.

It is the third time since its creation under Kenya's 2010 constitution that the court has been called upon to adjudicate on election disputes.

The seven-member panel held several days of hearings last week to consider seven petitions filed by Odinga and other groups and individuals.

Odinga has described the results of the vote -- which showed him losing by a margin of less than two percentage points -- and its handling by the Independent Electoral and Boundaries Commission (IEBC) as a "travesty".

The Supreme Court is the highest in the land, established "as the final arbiter and interpreter of the constitution".

Its rulings are final and binding.

The court comprises a president, vice president and five other judges. They are officially appointed by the head of state, although he does not have the power to choose them.

Instead, candidates' names are submitted to the presidency for approval after an open nomination process and public hearings, some televised, held by the judiciary.

The Supreme Court was established to rule on decisions by appeal courts regarding the law or interpretation of the constitution and is the only court permitted to adjudicate in election disputes.

Ahead of Monday's ruling, constitutional lawyer Demas Kiprono said Kenyans "must appreciate that the country has had a paradigm shift in terms of election dispute resolution".

"The level of confidence we see in the court is due to the constitutional transformation that created an independent judiciary that is also financially and functionally independent," he wrote in an opinion piece published in The Standard newspaper on Friday.

In the August 2017 poll, the incumbent Uhuru Kenyatta was declared the winner with 54 percent of the vote against 45 percent for Odinga.

Odinga petitioned the Supreme Court, claiming hackers broke into the IEBC database and manipulated the results.

In a shock decision September 1, the court ruled by a majority that the results were "invalid, null and void" and ordered a rerun, delivering a stinging rebuke of the IEBC.

The annulment was a first for Africa.

Although it won praise worldwide as a sign of judicial independence in Kenya, Kenyatta angrily called the judges "crooks" and the ruling led to bruising acrimony and unrest.

The court headed by then-chief justice David Maraga cited widespread "irregularities and illegalities" in the counting process and mismanagement by the IEBC.

A rematch was held on October 26 but Odinga boycotted the race, saying the IEBC had failed to make necessary reforms, and Kenyatta went on to win with 98 percent of the vote.

In an extraordinary turn of events in 2018, Odinga, a veteran opposition leader, joined hands with Kenyatta and was backed by the ruling party in this year's election.

In a major ruling in March 2022, the court -- under Chief Justice Martha Koome -- determined that a controversial bid to change the constitution was illegal, dealing a blow to Kenyatta who had spearheaded the proposals.

Known as the Building Bridges Initiative (BBI), the changes would have expanded the executive and increased the number of parliamentary seats, in the biggest revision of Kenya's political system since the adoption of the constitution in 2010.

After a near two-year legal wrangle, the judges deemed the BBI "unconstitutional", saying the president could not initiate such amendments, but left open the possibility for them to be submitted again by parliament or other means.

Koome, 62, was appointed chief justice in May 2021, the first woman to occupy the post.

The staunch women's rights campaigner had been seen as an unlikely candidate in a list of 10, including the lawyer who represented Kenyatta in the 2017 election case.

Koome made a name for herself during the autocratic regime of late president Daniel arap Moi when she represented political prisoners, including Odinga.

The University of London-trained Koome joined the judiciary in 2003 after practising as a lawyer for over a decade. In eight years, she rose to the Court of Appeal following stints at the environmental and family division courts.

During her vetting, Koome promised to rid the judiciary of corruption and safeguard its independence.

"I am a judge who looks at society and Kenyans will feel safe with me," she said.