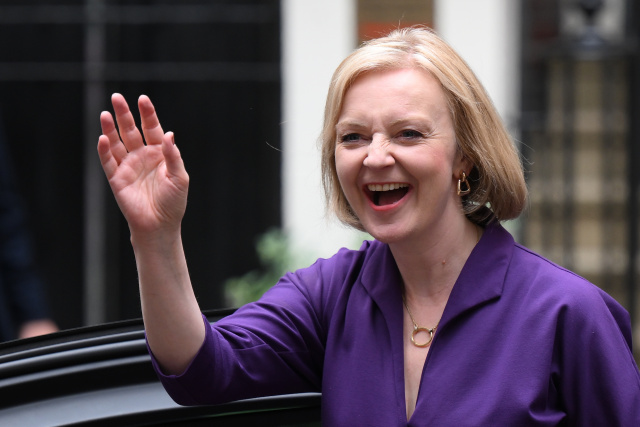 New Conservative Party leader and incoming prime minister Liz Truss smiles and waves as she arrives at Conservative Party Headquarters in central London having been announced the winner of the Conservative Party leadership contest at an event in central London on September 5, 2022. Truss is the UK's third female prime minister following Theresa May and Margaret Thatcher. The 47-year-old has consistently enjoyed overwhelming support over 42-year-old Sunak in polling of the estimated 200,000 Tory members who were eligible to vote.
(Photo by Daniel LEAL / AFP)

The foreign secretary resisted pressure for a politically perilous early election to confirm her new mandate, vowing instead to "deliver a great victory for the Conservative party in 2024".

Truss beat her rival, former finance minister Rishi Sunak, by about 57 to 43 percent after a summer-long contest decided by just over 170,000 Conservative members -- a tiny sliver of Britain's electorate.

Sunak -- who has been lukewarm about whether he would serve in Truss's cabinet -- tweeted that now was the time for the party to unite as "one family".

But Truss ignored her applauding rival as she marched up to the stage of the central London convention hall, calling it an "honour" to be elected after undergoing "one of the longest job interviews in history".

Truss vowed a "bold plan" to address tax cuts and the energy crisis, which she has indicated will be financed by much higher borrowing -- even at the risk of stoking double-digit inflation.

Truss, 47, will be the UK's third woman to become prime minister following Theresa May and Margaret Thatcher.

She will formally take office Tuesday, after Johnson tenders his resignation to Queen Elizabeth II.

"I know she has the right plan to tackle the cost-of-living crisis, unite our party and continue the great work of uniting and levelling up our country," Johnson tweeted.

"Now is the time for all Conservatives to get behind her 100 percent."

The leadership contest began in July after Johnson announced his departure following a slew of scandals and resignations from his government, including Sunak's.

Truss reserved a portion of her short speech to praising Johnson's record, including on Brexit and the Covid pandemic, and said he was "admired from Kyiv to Carlisle".

That won applause from the Tory faithful present. The right-wing ideologue, however, faces a tough task in winning over public opinion.

A snap poll by YouGov found only one in seven people thought Truss would be a better prime minister than Johnson, mirroring other recent surveys showing her low popularity.

One last month found 43 percent did not trust her "at all" to deal with the cost-of-living crisis, as energy prices rocket amid Russia's war in Ukraine.

Truss is also viewed with mistrust among some of Britain's allies, after taking a hard line against the European Union over post-Brexit trading rules for Northern Ireland.

"I look forward to a constructive relationship, in full respect of our agreements," European Commission president Ursula von der Leyen said, flagging climate change and Ukraine as areas for cooperation.

On the campaign trail last month, Truss meanwhile refused to identify French President Emmanuel Macron as a friend to Britain.

He said he was "ready to work together as friends and allies" after Truss's election.

Ireland's government also gave Truss a wary welcome, but the scale of the challenges ahead saw the Smarkets betting exchange give her a 25 percent chance of failing to last through 2023.

Millions say that with energy bills set to rise by 80 percent from October -- and even higher from January -- they face a painful choice between eating and heating this winter, according to surveys.

Polls show public support for an early general election, and the Conservatives face a growing challenge to retain their grip on power.

"But after 12 years of the Tories all we have to show for it is low wages, high prices, and a Tory cost-of-living crisis," Starmer tweeted.

"Only Labour can deliver the fresh start our country needs."

On Tuesday morning, Johnson will deliver a farewell speech at Downing Street before flying to Scotland -- where heavy rain is forecast -- to hand his resignation to Queen Elizabeth.

For the first time in her 70-year reign, the 96-year-old monarch will appoint the prime minister at her Scottish retreat, Balmoral, rather than at Buckingham Palace in London.

Truss is expected to fly separately to accept the queen's invitation to take over, to ensure continuity of government in case of any mishaps.

On her return to Downing Street, the new prime minister will then give a short address to the nation. By tradition, that happens on the steps of Number 10.

But it may have to be moved indoors with forecasts for thundery downpours, matching Britain's dismal outlook as the Truss government starts life.