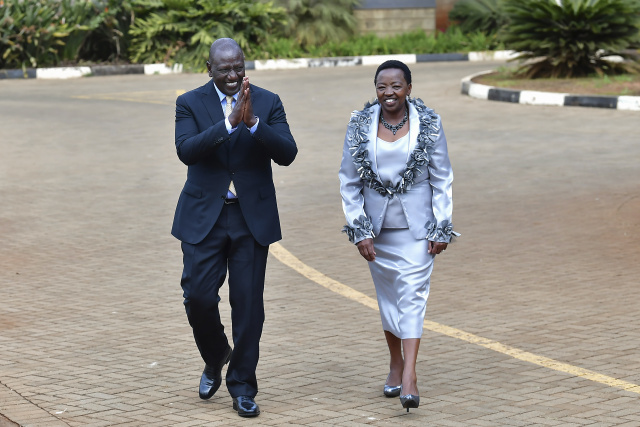 Kenyan President elect William Ruto (L) is accompanied by his wife, Rachel (R), as he heads to give a press conference at his official residence following a Supreme Court of Kenya ruling on the contested outcome of Kenya's presidential election, Nairobi, on September 5, 2022. Kenya's Supreme Court on September 5, 2022 upheld William Ruto's victory in the August 9 presidential election, ending weeks of political uncertainty and delivering a blow to challenger Raila Odinga who had alleged fraud in the poll. (Photo by Tony KARUMBA / AFP)

"This is a unanimous decision. The petitions are hereby dismissed, as a consequence we declare the first respondent (Ruto) as president-elect," Chief Justice Martha Koome said.

The verdict dealt a blow to challenger Raila Odinga who had alleged fraud and filed a petition against the poll outcome, which saw Deputy President Ruto scrape to victory by a margin of less than two percentage points in a tightly fought race.

Although voting day passed off peacefully, observers feared that the disputed outcome could fuel violence in a country with a history of post-poll unrest, with over 1,100 people killed in politically motivated clashes in 2007.

Ruto struck a conciliatory note, promising to extend "a hand of brotherhood" to his rivals, including Odinga, a veteran opposition leader now backed by outgoing President Uhuru Kenyatta and the ruling party.

"I extend a hand of brotherhood to all my competitors and to all their supporters. We are not enemies, we are Kenyans," Ruto, 55, said.

"Our election and judicial institutions have won."

Ruto will be sworn in on September 13, becoming Kenya's fifth president since independence from Britain in 1963 and taking the reins of a country beset by inflation, high unemployment and a crippling drought.

As Ruto supporters celebrated, Odinga, 77, said he respected the ruling but disagreed with its substance.

"We have always stood for the rule of law and the constitution. In this regard, we respect the opinion of the court although we vehemently disagree with their decision today," he said in a statement.

Kenyatta, who had a bitter falling-out with his former deputy in recent years, said he would "oversee a smooth transition to the next administration", but pointedly did not congratulate Ruto.

US Secretary of State Antony Blinken in a statement congratulated Ruto and commended Odinga and other candidates for abiding by the court ruling.

" Transparent electoral processes and the peaceful adjudication of disputes are testaments to the strength of democratic institutions," he said.

The results' announcement last month had sparked angry protests in Odinga strongholds, but there was no sign of violence on Monday.

In his lakeside bastion of Kisumu, messages calling for peace were plastered on walls and pinned to poles as police patrolled the streets.

"We don't want trouble because we have realised we are the ones who suffer," said Nelima Atieno, a seller of second-hand clothes.

"We can't change the verdict even though it is painful."

Judges spent the last two weeks sifting through boxes of evidence to establish if any irregularities were substantial enough to nullify the election, as was the case with the August 2017 presidential poll, which Odinga also challenged.

Koome said the technology used by the Independent and Electoral Boundaries Commission (IEBC) met the standards of "integrity, verifiability, security and transparency".

Any "irregularities were not of such magnitude as to affect the final results of the presidential election", she said, dismissing all the claims made by the petitioners.

Odinga's 72-page petition alleged hackers broke into IEBC servers and uploaded doctored result forms, but the court said there was no evidence to back the claim.

In several towns, the verdict sparked celebrations among Ruto supporters, who cheered and banged plastic buckets.

"I am filled with joy," said Hassan Barre, a Ruto voter in the northeastern town of Garissa.

"We know the lives of Kenyans will be better... all those who are at the bottom will be uplifted. Businesses will flourish and food prices will go down."

In Nairobi, stony-faced Odinga supporters expressed their disappointment, with a group of women telling AFP: "Not all of us are happy."

But with the economy in the doldrums, many Kenyans said they were relieved to see an end to the political drama.

"This announcement enables us to move on (with our lives)", said Caroline, a 30-year-old flower seller in the capital.

Analysts said any protests were unlikely to lead to prolonged unrest.

"The unanimity of the legal ruling and the ongoing economic crisis will dampen the appetite for conflict," said Ben Hunter, Africa analyst at risk intelligence group Verisk Maplecroft.

Murithi Mutiga, the International Crisis Group's programme director for Africa, said on Twitter that "the biggest winner of the Kenyan election is the Kenyan people".

"From a time when elections were a life and death affair, now they are routine."

Since 2002, no presidential poll outcome in Kenya has gone uncontested, with Odinga previously claiming to have been cheated of victory in the 2007, 2013 and 2017 polls.