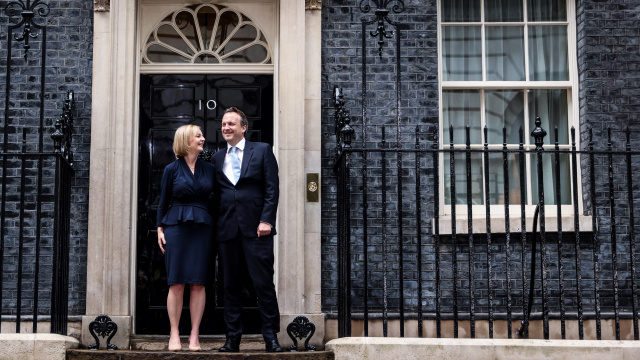 Standing outside 10 Downing Street, Britain's newly appointed Prime Minister Liz Truss poses for photographers with her husband Hugh O'Leary, after delivering her first speech as Prime Minister in central London, on September 6, 2022. Liz Truss on Tuesday officially became Britain's new prime minister, at an audience with head of state Queen Elizabeth II after the resignation of Boris Johnson. The former foreign secretary, 47, was seen in an official photograph shaking hands with the monarch to accept her offer to form a new government and become the 15th prime minister of her 70-year reign.
(Photo by Adrian DENNIS / AFP)

(AFP) - Liz Truss on Tuesday unveiled her new top team as she formally took over from Boris Johnson as UK prime minister, with no place for white men in any of the three senior-most cabinet posts for the first time ever.

As expected, she rewarded allies to her during her victorious Conservative leadership campaign, promoting Kwasi Kwarteng to finance, James Cleverly to foreign affairs and Suella Braverman to interior.

The son of Ghanaian immigrants, Kwarteng is the country's first black chancellor of the exchequer. His immediate focus will be turning round Britain's dire economic fortunes.

Cleverly is a mixed-race army reservist who served under Truss at the foreign office, while Braverman, whose parents are of Indian origin from Kenya and Mauritius, inherits a tricky brief from Priti Patel.

In her first call with a foreign leader, she told its president, Volodymyr Zelensky, that "Ukraine could depend on the UK's assistance for the long term," a Downing Street spokeswoman said.

They also agreed on the need to protect peace in Northern Ireland, where post-Brexit trade arrangements are causing instability and could undermine the so-called "special relationship" between London and Washington.

Heavy rain forced her supporters to scramble for cover as they waited for her to arrive in Downing Street to make her inaugural speech.

But the clouds lifted as the 47-year-old former foreign secretary's motorcade swept in, and she vowed the country would "ride out the storm" of double-digit inflation and soaring energy prices.

"I will take action this week to deal with energy bills and to secure our future energy supply," she said.

"As strong as the storm may be, I know that the British people are stronger," she added, outlining her priorities as the economy, energy and health.

Truss became Tory leader on Monday after a summer-long campaign sparked by a rebellion against Johnson in July following a series of scandals.

She arrived in Downing Street after a 1,000-mile (1,600-kilometre) round trip from London to see Queen Elizabeth II in the Scottish Highlands, where she accepted the invitation to form a government.

As soon as Thursday, Truss is expected to sanction a freeze on household energy bills to prevent steep hikes this winter, and possibly beyond, at a cost of tens of billions of pounds.

Hard-pressed households facing 80-percent increases in electricity and gas bills from October have demanded immediate action to prevent millions being forced to choose between heating and eating this winter.

Businesses have also warned they could be forced to close because of even steeper hikes in energy costs.

Truss, who touts herself as a free-market liberal, has promised tax cuts to stimulate growth, despite warnings that greater borrowing could make inflation worse.

The contrast to her beaten leadership rival Rishi Sunak's more cautious approach has opened another rift in the Conservative party that was already divided by Johnson's departure.

Recent opinion polls suggest a sizeable chunk of the British public have no faith in her ability to tackle the cost-of-living crisis.

A new poll by YouGov said only 14 percent expect Truss to do a better job than Johnson.

Johnson, whose tenure was dominated by Brexit and Covid, and cut short by the succession of scandals, earlier promised Truss his unswerving support as he made a farewell speech in Downing Street.

"I will be supporting Liz Truss and the new government every step of the way," he said, before leaving for Balmoral to tender his resignation to the queen.

But the former newspaper polemicist has failed to dampen speculation that he is eyeing a potential return to the political front line.

"Like Cincinnatus, I am returning to my plough," Johnson said. Latin scholars were quick to point out that the Roman statesman eventually returned to politics.

Johnson, 58, remains popular among grassroots Tories as a charismatic election winner who took the country out of the European Union.

Despite repeated accusations of corruption and cronyism during his tenure, and an unprecedented police fine for breaking his own lockdown rules, Johnson is said to be smarting at having to leave.

Truss has ruled out seeking her own mandate at an early general election, promising to extend the Tories' 12 years in power from 2024.

General » Be a reporter: Write and send your article » Subscribe for news alert
Tags: Truss, UK