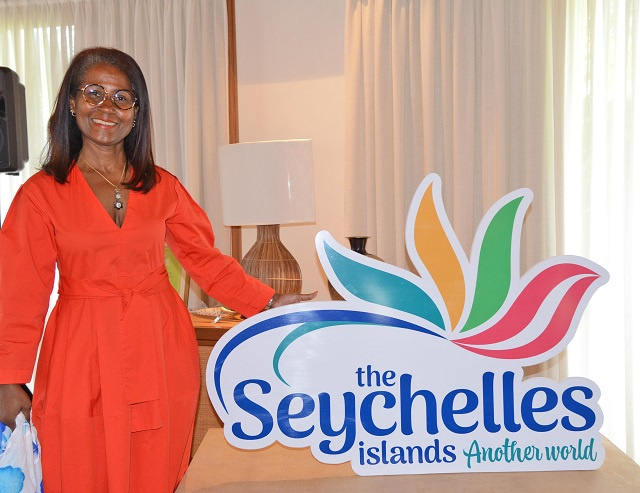 (Seychelles News Agency) - Seychelles’ tourism industry players were shown on Wednesday the archipelago’s ‘modernised’ brand with newly infused “'energy', in a bid to remain on the same level with competitors in the field.

The refreshed logo still maintains elements of the initial shape representative of important Seychelles icons, from palm trees and flowers to endemic birds like the Paradise Flycatcher and the Tropicbird – but with a modern twist.

In her short address to those attending the unveiling ceremony, Тourism Department Principal Secretary Sherin Francis said the new logo is “something that will very much represent what the nation’s about”.

Top Tourism Department official Bernadette Willemin presented the new material to representatives from the destination management companies, hotels and airlines saying that “The Seychelles’ existing brand was lacking some energy – which is what we have given back to our brand today,” she elaborated.

The reveal, held at L'Escale Resort Marina and Spa on the main island of Mahe, is mere weeks before the industry uses the new images to represent Seychelles at the International and French Travel Market (IFTM) Top Resa in Paris fair on September 20.

IFTM Top Resa is the major French Travel event which takes place in Paris annually through which French travel trade professionals network and build connections with their colleagues from around the globe.

Seychelles has been attending the fair for over a decade. France is one of the main markets for tourists to the country and this year they account for 30,278 visitors, according to the National Bureau of Statistics figures for August 2022.

In an interview with the press after her presentation, Willemin said that it was the right time for the changes as “when we were comparing our brand to others, we were losing visibility”.

She went on to explain that during the initial overhaul of Seychelles marketing materials in 2006, “the digital world did not play the huge role it does today”.

“Today we see that we have many constraints when we are working digitally on social media and especially in areas where we need to work on our logo in smaller formats,” she added.

However, while looking to tweak the marketing materials, Seychelles found it essential to ensure that end users are still able to identify the tourism destination.

“When you put the old logo next to the new one, you can still recognise us,” explained Willemin.

She added that if there had been a complete change of the logos it would mean “using a lot of resources to get people to re-associate themselves to the brand”.

The Union – a company based in Glasgow, Scotland, which initially worked on the complete re-branding of the Seychelles islands’ marketing 16 years ago – was chosen to carry out the tweaks on the new logo.

The marketing company was chosen not only because of its previous extensive work with Seychelles but also because the Union was founded by a Seychellois, “which was very important to us as he knows the country, the culture and the people”.

After receiving the brief, the Union sent technicians to Seychelles to “get a feel of the country, the culture and what the department wanted”, as well as work with Tourism Department officials for the final product.