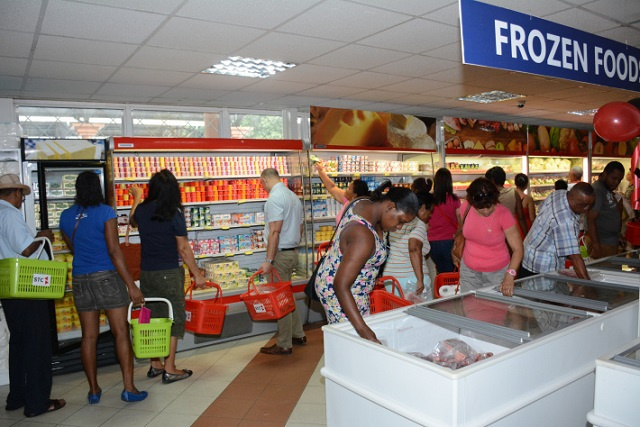 Inflation is hitting consumers hard, and the government has decided to respond by controlling prices for STC-sold products (Seychelles Nation)

(Seychelles News Agency) - As the cost of living in Seychelles is continuing to rise due to the higher prices of global commodities that are imported into the country, the government of Seychelles has decided to introduce new measures to mitigate the impact.

As of October 1, 2022, commodities classed as category one, will have a maximum retail price (MRP), which will remain for one year, a top trade official revealed on Thursday.

Category one commodities or commonly known as essential commodities, which are imported by the Seychelles Trading Company (STC), will now have to be sold at a price no higher than that set by STC during the coming one-year span, where the hope is that this will help to alleviate the pressures of increased prices on the population.

“The government has taken this decision as part of its plan to continue to ease the impact of rising prices globally, to ensure that the public can continue to access essential commodities at an affordable price,” said the Director General for Trade, Ricky Barbe.

There was already a measure in place to keep the prices of these items at an affordable price, which was a recommended retail price (RRP), but that will now be replaced, to avoid having merchants selling the products at a higher price.

The MRP will only affect the brands imported by STC and will not affect those imported by other wholesalers and retailers in the country, however.

“This measure will not affect all importers, only STC, which means that competition will continue and will we feel that the MRP will not be a full-on price-control but is an emergency measure put in place to help the population,” added Barbe.

The Fair Trading Commission (FTC) will be given the task of ensuring that all retailers are respecting the MRP when it comes into effect on October 1.

Barbe, however, said that there are still discussions and work being done to ensure that this measure is implemented well and does not put pressure on the merchants themselves.

Another measure announced by Barbe, during the press conference held on Thursday, was that boats that transport commodities between the three main islands of Mahe, Praslin and La Digue, will receive a 25 percent excise tax concession on their fuel used.

“The cost of transportation between these islands often causes commodity prices to be higher of Praslin and La Digue, so with this measure we hope that it will help keep the prices at an affordable level for inhabitants of these two islands,” said Barbe.

He added that the rising cost of fuel would have meant that the cost to transport these goods would be higher, with that cost then passed on to the consumers.

“This will also be for the period of one year and will cost the government approximately SCR 17 million [$1.2 million],” Barbe concluded.