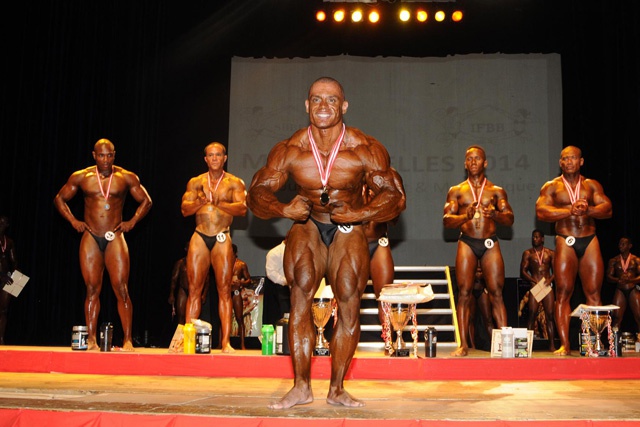 Mekdachi who is confident of becoming a professional bodybuilder in the near future confirmed his status as Seychelles’ top bodybuilder at the International Conference Centre in the archipelago’s capital of Victoria.

Last night’s triumph was his third time winning the prestigious title after a similar feat in 2009 and 2013.

Apart from those competing in the Junior and Senior categories there were also a Mr Physique title up for grabs in yesterday evening’s competition.

Still in high spirit after his stellar performance which earned him a second place finish at the Mr Olympia Amateur event last month, the odds of Mekdachi falling short of defending his Mr Seychelles title were very slim.

He was however being challenged by the ever improving Rodney Henriette who won the Mr Regatta title in September and a former winner of the Mr Seychelles title Fabien Antat who was making a big comeback to the sport after a two year absence.

Nevertheless both Antat and Henriette were unable to prevent Mekdachi to brush aside the challenge with relative ease and emerge victorious.

Speaking to SNA, Mr Seychelles 2014 said he was impressed with the level displayed by his opponents.

“There is an evident boost in motivation and morale within the sport presently, probably due to the success I achieved internationally recently,” said Mekdachi.

“I have to congratulate the other athletes for doing their part to bring the sport back to the heights it used to be…..I even noticed new faces in the crowd, plus a VIP section...for this competition. This means the sport is on the right track or has reached a level higher, which can only be good news,” he added.

Asked if he ever felt threatened by the return of former Mr Seychelles Fabien Antat in last night's competition; Mekdachi explained that he almost "never focuses on individuals during a competition."

“I always compete against everybody present and not just one or two adversaries. But I have great admiration for the other athletes, I was pleasantly surprised by their performance and I applaud their efforts. It was not an easy win, it never is, which makes this third title my proudest moment.”

Antat eventually came out third out of 15 bodybuilders vying for the senior title while Rodney Henriette came out second.

The 2014 Mr Regatta (Henriette) said he was confident he would finish in the top two, noting that he was additionally aware that it would take a top-drawer performance to outclass Mekdachi.

“He (Mekdachi) is the best bodybuilder locally and probably in the region at the moment, we have to respect that,” Henriette told SNA.

For his part Antat said he was particularly happy with his third place finish, having only returned to the sport barely five and half months ago.

“I’m proud of myself, I felt I could have done better, but I am not one to judge my performance, the judges and the public made their choice and they decided I was third, I’m very happy with that,”  said Antat.

Meanwhile the Mr Seychelles junior title was won by Rudy Michel who came out ahead of Alain Barallon and Marcus Andre.

Last year’s winner of the junior category Vicomte Laboudallon contested alongside the seniors this year and fell short of making the final six which included Joe Gabriel, Andy Anthony and Antoine Rachel alongside the first, second and third place winners.

While the excitement has ended for some of the bodybuilders others still have work to do to compete in an upcoming competition.

For comeback bodybuilder next on the agenda is a regional event dubbed ‘Night of the Champions’ in Mauritius, later this month which he is hoping will help him to build momentum as he prepares for his permanent return to the sport.

This means he would also be competing against Mekdachi and Henriette all over again, as they have also made known that they will feature at the Mauritius meet.

The reigning Mr Seychelles has already indicated that he plans to close the year 2014 with a win in Mauritius at an event that will bring together athletes from all over the Indian Ocean region.

“The competition is kind of a mini Mr Indian Ocean event, so it important to do well there,” said Mekdachi.