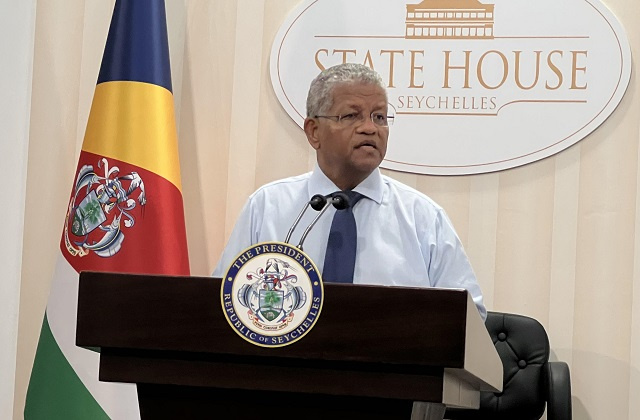 In view of the passing of Queen Elizabeth II on Thursday, the press conference started with a moment of silence as a sign of respect for the monarch – who had also been Seychelles’ head of state before the country’s Independence in June 1976.

Journalists from all media houses in the western Indian Ocean island state who congregated at State House mainly concentrated on the newly refreshed Tourism Department logo, which was unveiled earlier during the week and the department had stated that it cost £30,000 ($34,469) or SCR 452,000 for the amended logo package from a Glasgow-based company, The Union.

During the four-hour long event, Ramkalawan explained to members of the press that “although the price was a bit steep” this was due to the fact that the Tourism Department had not only received a rebranded logo but “that there was a whole package with other aspects included”.

However, due to the controversy surrounding the cost, Ramkalawan said, “I have spoken to the owner of the company who has agreed to lower the price of the logo by at least 50 percent.

When asked about his administration’s performance, Ramkalawan stated that he was satisfied with the work they have put in and that there “would be no re-shuffle as this was not in their vocabulary”.

However, President Ramkalawan did appeal to civil servants to do their jobs effectively as he wishes the "government was run as a business” – making it more efficient.

The war on drugs and the reported cases of alleged “abuses” by officers was also talked about in the press conference.

“I am happy with the way the fight has taken on a new lease of life,” he said, going on to add that “there was a time when it had lulled, but now it is going better”.

It was revealed that a series of illegal activities and items were discovered during drug raids – including an array of knives, illegal scooters and stolen properties found in the raided drug hotspots.

“We are now using body cams in the raids,” he said, “this is because I do not want anyone to be abused”.
“If there are cases of abuse reported in the future, we can look it up,” he said.

The Seychelles Police is using sniffer dogs as well in the operations.

Improving internet access and pricing is another area the government is working on. Ramkalawan stated that although it is still a “work in progress" much has been done in that area.

“We are hoping that the installation of the second cable will allow internet service providers to lower their costs,” said Ramkalawan in response to questions on the improvement of the sector.

President Ramkalawan said that the authorities are working to prepare the Palais des Sports, the swimming pool and the stadium among others, in preparation for the Indian Ocean games.

Furthermore, he announced that Seychellois travelling to Israel will soon be able to receive their visa on arrival, following discussions and cooperation between the two countries.

Also, he said that youngsters with vocational abilities will be able to attend a new Vocational School – which will be based at Ile Aurore.