Grief, solidarity as US marks 21st anniversary of 9/11 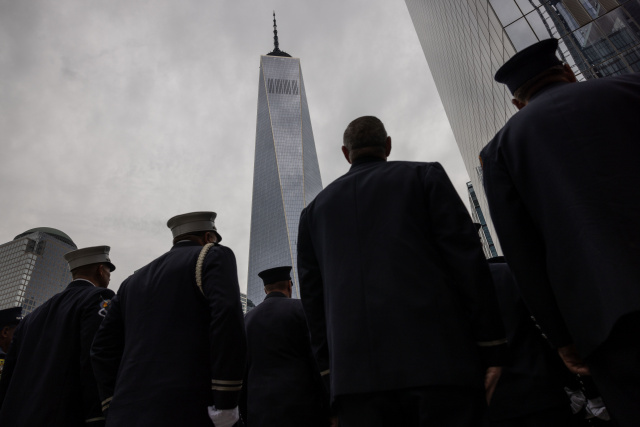 Firefighters stand in line during a moment of silence near the 9/11 Memorial in New York City, on September 11, 2022, on the 21st anniversary of the attacks on the World Trade Center, Pentagon, and Shanksville, Pennsylvania. (Photo by Yuki IWAMURA / AFP)

(AFP) - The United States on Sunday observed the 21st anniversary of the 9/11 attacks, with President Joe Biden recalling Americans' sacrifice and honoring the nearly 3,000 people killed when hijacked planes hit the Twin Towers, the Pentagon and a Pennsylvania field.

Relatives of victims, police officers, firefighters and city leaders gathered at the National September 11 Memorial in Lower Manhattan, where the names of those who died there were read aloud in an hours-long ritual that has occurred annually since the deadliest single attack on US soil.

They rang bells and held moments of silence six times, including at 8:46 am and 9:03 am (1246 and 1303 GMT), the precise minutes the passenger jets struck the World Trade Center's North and South Towers.

Biden commemorated the anniversary at the Pentagon, where Al-Qaeda hijackers crashed a plane into the massive building that serves as Defense Department headquarters.

In a steady rain, the president approached a wreath of flowers and placed his hand over his heart.

"I know for all those of you who lost someone, 21 years is both a lifetime and no time at all," Biden said in a somber speech.

"The American story itself changed that day," he said. "What we cannot change, never will, is the character of this nation" the attackers sought to wound.

"The character of sacrifice and love, of generosity and grace, of strength and resilience," he said.

Biden also recalled how in the hours after the attacks, Queen Elizabeth II -- who died Thursday at age 96 -- sent a touching message to the American people.

"She pointedly reminded us: 'Grief is the price we pay for love,'" Biden said.

Al-Qaeda hijacked a total of four planes. The third hit the Pentagon and the fourth, United Flight 93, was reportedly headed to the US Capitol Building when passengers and crew onboard fought the hijackers.

The plane crashed in a field near Shanksville, Pennsylvania, killing all aboard.

First Lady Jill Biden attended a ceremony there Sunday. September 11 "touched us all," she said. "It changed us all. It reminds us that, with courage and kindness, we can be a light in that darkness."

She has said that the passengers' actions on Flight 93 saved scores of lives -- possibly including that of her husband, then a US senator who was headed to the Capitol that day.

Vice President Kamala Harris and Mayor Eric Adams were among dignitaries attending the New York event, where relatives hugged and wept, placed flowers at the memorial and held placards with images of their lost loved ones.

"While the grief recedes a bit with time, the permanent absence of my father is just as palpable as it ever was," the son of Jon Leslie Albert said after reading several victims' names, including his father's.

September 11 marked a foreign attack on American soil, but Biden has warned the country faces anti-democratic turmoil from within, notably from his predecessor Donald Trump's supporters who stormed the US Capitol on January 6, 2021 seeking to overturn the 2020 election.

On Sunday, he subtly touched on the issue, urging Americans to "secure our democracy together."

"It's not enough to stand up for democracy once a year or every now and then," he said. "It's something we have to do every single day."

Condolence messages arrived from foreign dignitaries including NATO chief Jens Stoltenberg, Canada's Prime Minister Justin Trudeau and Ukrainian President Volodymyr Zelensky, who called September 11 "one of the most tragic days" for the US and the world.

New York was illuminated late Saturday by a "Tribute in Light" that showed two blue beams, symbolizing the Twin Towers, projecting into the night sky.

In addition to those killed on September 11, thousands of first responders, construction workers and residents have since fallen ill, many of them terminally, as a result of inhaling the toxic fumes.