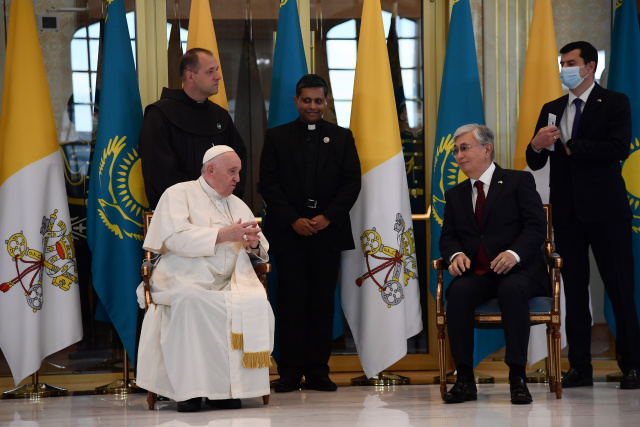 Pope Francis is welcomed by Kazakh President Kassym-Jomart Tokayev upon his arrival at Nur-Sultan International Airport in Nur-Sultan on September 13, 2022. (Photo by Filippo MONTEFORTE / AFP)

(AFP) - Pope Francis on Tuesday appealed for peace and an end to the "senseless and tragic war" in Ukraine during the start of a three-day visit to Kazakhstan.

The Argentine pope, who is forced by knee pain to use a wheelchair and has admitted he must slow down or consider retirement, made the journey to participate in an inter-religious summit.

A simultaneous visit by Chinese leader Xi Jinping has led to speculation of a possible historic meeting.

"I have come to echo the plea of all those who cry out for peace," Francis said during an address to diplomats and members of civil society.

"Now is the time to stop intensifying rivalries and reinforcing opposing blocs," he said, calling for a new "spirit of Helsinki", referring to 1975 accords that helped bring an end to the Cold War.

President Kassym-Jomart Tokayev said it was a "great honour" to welcome the 85-year-old pontiff on his arrival in the capital Nur-Sultan, his 38th trip abroad since his election in 2013.

Russian Orthodox Patriarch Kirill, a close ally of President Vladimir Putin, was initially expected but has pulled out of the September 14-15 event, dashing hopes of a meeting with Francis over the Ukraine conflict.

While the pope has called for peace and denounced a "cruel and senseless war", Kirill has defended Putin's "military operation" and the fight against Russia's "external and internal enemies".

About 100 delegations from 50 countries are expected to take part in the event in Kazakhstan, a former Soviet republic that gained independence in 1991.

"Dialogue, a coming together, the search for peace between different religious and cultural worlds are at the heart of this trip," Vatican spokesman Matteo Bruni said Monday.

Tokayev, 69, is an ally of Russia, though there have been tensions between the two countries since Moscow launched the invasion in February.

He has refused to support the war and the presence of a large Russian community in the north of Kazakhstan has sparked fears of a revival of Moscow's imperial ambitions in the area.

Kazakhstan borders other former Soviet republics, as well as China and the Caspian Sea.

Lyudmila, a 74-year-old pensioner who declined to give her last name, said she hoped the papal visit would encourage people around the world to learn more about Kazakhstan.

"Maybe it will raise the profile of our country, that such a great spiritual figure is visiting us," she told AFP.

On Wednesday, Francis will address the opening of the plenary session of the Congress of Leaders of World and Traditional Religions, before celebrating a mass in the afternoon and winding up his trip Thursday by meeting Catholic leaders.

Chinese President Xi Jinping will be in the country at the same time as Francis at a time when the Vatican is hoping to renew a historic accord appointing bishops in China.

Asked by journalists during the flight about a possible meeting with Xi, Francis said he had "no information" about any possible talks.

He added, however, that he was "always ready to go to China".

Energy-rich Kazakhstan has 19 million inhabitants, 70 percent of whom are Sunni Muslims, while 26 percent are Christians -- mainly Russian Orthodox. Less than one percent are Catholic.

Tokayev began a series of reforms after his election in 2019, but the country was rocked by protests over fuel prices earlier this year that left more than 200 people dead and shattered its image of stability.

Francis is the second pope to visit Kazakhstan after John Paul II's trip in September 2001.

He said last week that doctors had forbidden him from travelling to Ukraine or Moscow for now, as he recovers from a knee problem that has forced him to cancel numerous events at the Vatican.

Business » Be a reporter: Write and send your article » Subscribe for news alert