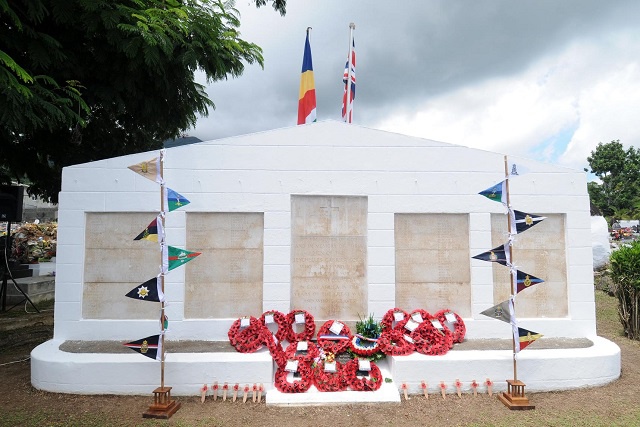 Remembrance Sunday, which is observed on the Sunday nearest to Armistice Day on November 11 has today evolved to pay homage to all soldiers who have paid the ultimate price for their country since then. (Patrick Joubert, Seychelles News Agency)

(Seychelles News Agency) - Tomorrow, Tuesday November 11, will mark the passing of 96 years since the First World War was brought to an end after just over four years of fighting. It was on this day at exactly 11 am in the year 1918 that the Armistice was signed in the Forest of Compiègne, north of the French capital of Paris.

It seems remarkable that even a tiny and remote island nation such as Seychelles should have been touched by the war, which claimed over ten million military lives and 7 million civilian lives in total, but, like almost every other nation in the world, a great number of Seychellois servicemen fell during the Great War.

Remembrance Sunday, which is observed on the Sunday nearest to Armistice Day on November 11 has today evolved to pay homage to all soldiers who have paid the ultimate price for their country since then.

Seychelles joined other Commonwealth nations throughout the world yesterday to commemorate Remembrance Sunday and honour the over 300 brave Seychellois who sacrificed their lives in not only World War I but the Second World War as well, which came to an end in 1945.

A mass was celebrated at the Anglican Holy Saviour church at Anse Royale in the south of the main island of Mahé, which contains a plaque bearing the names of some of the Seychellois men who lost their lives during World War I.

This was followed by the laying of poppy wreaths at the cenotaph at the Mont Fleuri cemetery on the outskirts of the capital of Victoria, where the names of the Seychellois servicemen who died in both World Wars are listed.

The hour-long ceremony was attended by a group of ex-servicemen, members of the Seychelles People's Defence Forces (SPDF), families of fallen war veterans, government representatives, and members of the diplomatic corps. Those assembled all wore a poppy, the bright red flower which symbolises the flowers which grew on French and Belgian battlefields during World War I.

The British High Commissioner to Seychelles, Lindsay Skoll, said this was an occasion to honour the incredible courage and sacrifice of Commonwealth service men and women who gave their lives to protect the freedom that we enjoy today.

"We can never fully repay the debt we owe them. But, we can for a moment, take a pause in our busy lives to stand and remember, and honour what they have given us," she said.

“This year on the 100th anniversary of the year that World War 1 began we remember once more the 1,700,000 Commonwealth servicemen and women and millions more on both sides, who lost their lives in the two World Wars alone and have continued to do so in modern campaigns, albeit now on a thankfully smaller scale.”

The cenotaph at Mont Fleuri reads “To the glory of God and in memory of the men of the Seychelles Carrier Corps, who risked and lost their lives for King and country in the Great War."

A smaller plaque at the bottom of the cenotaph which remembers Seychellois men fallen in World War II reads, “And of Seychellois of the Pioneer companies and other units who fell in the 1939-45 War."

Seychelles, a tiny Indian Ocean archipelago of 115 islands, was a British colony at the time of the First World War and for this reason ended up sending troops to the great battle.

With a recorded national population of just 22,600 at the time, less than a quarter of the current population of Seychelles – the lives of 347 young men were taken by the conflict.

This did not discourage many more Seychellois to take up arms again in defence of the Commonwealth at the outbreak of the Second World War.

The last of the great heroes

All surviving Seychellois who took part in World War I have since passed away, but there are still a few remaining servicemen left from World War II.

Betty Price, aged 87, served from 1943 to 1951 in the Local Defence Corps, at North East Point, which as the name suggests is on Mahé’s north eastern coast and was used for surveillance purposes.

Several ex-servicemen present, including those who joined in the 1960s and formed part of the British army's logistics units, also wore medals obtained during their service in the British army.

Major Andre Baronne was among those who joined in 1962, being stationed mainly in the Medical Corps. Baronne recalls that one year after his recruitment, while he was still undergoing training in UK, his unit was urged to prepare for what could be a Third World War.

That was at the time of the Cuban Missile crisis, which could have sparked a major conflict between the USA and Soviet Union.

He was later to be part of the back-up forces for the first war in Iraq, after the Middle Eastern country had invaded neighbouring Kuwait in 1991.

Another ex-serviceman, Harry Annacoura, served for over 20 years in the Royal Corps Communications unit where he worked in administration and was subsequently awarded the British Empire Medal.

“I was a good rugby player and also did a lot of carpentry. Apparently, my voluntary work was being carefully monitored by senior officers," recalled Annacoura.

Many Seychellois joined the British army as there were few job opportunities in Seychelles before tourism developed on a large scale with the opening of the international airport in 1972.

The last batch of about a dozen Seychellois joined in 1971, a year before the airport's inauguration.

Among them was Selby Payet who rose to the rank of Major and Sunday was wearing a display of eight medals. He served as a parachutist and was active in two wars: Iraq as well as Kosovo.

Payet, who served until 2004, said his silverware included the Queen's Jubilee Medal and the Service Medal.

For Payet, soldiering appears to run in the family. His uncle, Auguste Payet died in World War II, while his father, Mathias Payet, now 91, also served in the same War.