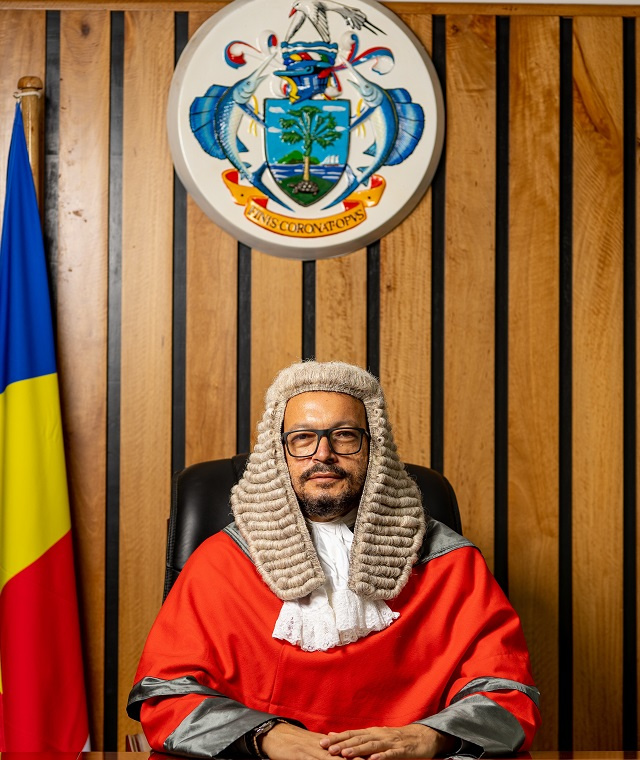 Rony Govinden was sworn in as Chief Justice of the Supreme Court of Seychelles on November 20, 2020.  (Judiciary of Seychelles)

(Seychelles News Agency) - As the world celebrates the International Day of Democracy on Thursday September 15, the Seychelles’ Chief Justice, Rony Govinden, issued a statement in which he spoke about freedom of expression.

Govinden said that "freedom of expression is important as it is through the free and unhindered capacity to express oneself that access to justice is possible, as justice is sought and delivered through human expressions.”

Rony Govinden was sworn in as Chief Justice of the Supreme Court of Seychelles on November 20, 2020, to become the fourth Seychellois to assume the position. He succeeded Mathilda Twomey, whose mandate ended in September the same year.

Prior to his appointment, Govinden was a judge of the Supreme Court since 2017 and spent between 2008-2017 as the Attorney General.

After almost two years in office, SNA met with Govinden for a progress update of the judiciary's achievements so far.

SNA: How would you describe the caseload at the moment?

CJ: I would say that it is more or less the same. The issue of backlog is an eternal issue for small jurisdictions such as Seychelles given the constraint on resources. We have presently nine judges hearing cases before the Supreme Court.

We have new magistrates that hear cases before the Magistrates' court and on a daily basis we sit in our court, we hear litigations. We try to balance the need for us to have a hearing within a reasonable time but at the same time not to rush with cases. That's quite a delicate balance that you need to do in law because they say that justice hurried is justice buried.

In the process of law, you have to allow each party sufficient time to argue their case. That means in a criminal prosecution, the prosecution and the defence also. The hearing also englobes things that necessarily makes it even lengthier with interpretation - which is also a fundamental right and freedom. We also need to give space to the stenographers to type out their cases; the proceedings so that it comes before a judge.

Space also for the judge to assess the evidence and take some time to make a proper determination. and then for legal submission has to be made and the right to appeal is also part of the inherent process.

Working within the budget, we recently appointed new judges because we need to find out where we can hire to help with the caseload and backlog, and then we do it. But there is always financial constraint as well, balancing between hearing things quickly and also knowing that appointing judges uses taxpayers' money.

SNA: What would you say have been the challenges so far in your mandate?

CJ: I am still early in my mandate I am not even two years in, but my main challenge unfortunately as for many of us has been this disease which am sure is about to pass - COVID-19. It was a big challenge for us here and we had to be very imaginative in making use of technology using audio visual to ensure that cases that had to be heard were heard.

Another challenge is a lack of resources, especially human resources, people who are competent in law and want to be judges. Even though sometimes we advertise we don't have the right candidates who come forward and many of them are expatriates.

Another challenge as a judge is how to pursue our duties while facing the constraints of a small jurisdiction like Seychelles. It's not easy to put a smile on your face and sit in court sometimes knowing the pressure that they put upon you directly or indirectly for you to think a certain way. You should be able to keep your thoughts to yourself and limit yourself to the context of the case before the court. You lose many friends and you make many enemies and you can even lose certain family members as a result of you being a judge in a small jurisdiction.

SNA: Why is it that people do not want to be judges?

CJ: I get a feeling that once you have been in law for quite a while, you have other aspirations. The law says you have to have more than seven years' experience as a lawyer to become a judge. Once you have that experience you have established your career path, your practice and you might have vested interests.

It's not only for Seychelles but for everywhere else. So, what you'll find within that group of experienced counsel, those few and far between who really aspire to be a judge. Otherwise, most of them will want to quit their profession. Also, our social lives are affected. What you can do as a lawyer you can't do as a judge. You have constraints on your social life and this is magnified in a small jurisdiction as ours.

SNA: How do you ensure the rule of law is respected?

CJ: There are two ways that we can look at the rule of law. One is that nobody is above the law - even us judges, the executive, or the legislature. Whoever commits a crime should be amenable to the law. This is the first way that we look at it. Then there is the written law of the National Assembly; when it speaks, it has to speak clearly, succinctly, and in a way that the people understand so we need to have clarity in the law. So, we also interpret the law, as enacted, to ensure that the common citizen of this country can follow the law and, therefore, not fall foul of the law.

SNA: As there are laws that are not succinct, are there things you can do to advise the legislature so that they may come up with clearer laws?

CJ: Legislative drafting of laws is something that the executive does together with the National Assembly, the judiciary only interprets the law. To us the clearer the law, the better the interpretation. Because it is targeting mostly laymen, it has to be clear enough so that the typical Seychellois individual should be able to read the law, without the need for a lawyer.

I have also seen certain progress such as non-gender biased terms being used, instead of 'he' which used to be very prevalent in law. We have moved on; we use 'they' or he or she. Even in the very use of technical terms, there is a reduction.

There are instances where you cannot live without putting the technical term because the law is technical. We are also pushing to ensure that the typical Seychellois can understand by reading it. Obviously, they might not understand the depth that a lawyer will but they may understand in order to know what to do next in terms of their rights and duties.

SNA: Now that the laws are easier to understand by the layman, will that make it possible for people to represent themselves in a court of law as well as make lawyers more accountable?

CJ: The need to have legal practitioners in a society will always be present. There are certain things that a layman will find difficult or it's not advisable for a person to do without legal counsel because of the consequences on their rights.

At certain levels, it would be good to have persons able to have access to laws in a way that they can be properly informed. Both in the judgement of the court when we are writing it down and in the laws and regulations of the National Assembly. This will facilitate them in exercising their rights, for example, freedom to information, right to have access to the court and right to commodities.

It will reduce the pressure because at some point the person will be satisfied that he or she can read the law, appraise himself or herself with the law and be satisfied that he or she will achieve a result from that interpretation. That is actually one of the marks of a more successful society, which is fewer litigation, fewer court cases and hopefully, people have the ability to resolve issues amicably among themselves.

Also, I have noticed that in certain jurisdictions, in order to become more user friendly towards persons using the law, what they've done besides using the law and putting the law in more layman's terms as possible. It facilitates access to justice and participation of citizens in the justice system. But we're not there yet, though in some way certain tribunals, like the Family Tribunal, have this.

SNA: What are your views on the criticisms nationally and internationally on whether the Seychelles judicial system is able to deal with high-profile cases in court?

CJ: Seychelles is a democratic sovereign republic. I make sure daily, that the rule of law is abided to and all the fundamental rights and freedoms are taken care of, in the judicial sense of the word.

These big cases are big in magnitude, in name, they are big in maybe the persons involved, in the amount involved - but to us, it is one of those cases. We deal with these cases on a daily basis.

Maybe given the magnitude in terms of the amount of evidence, the persons involved, the legal practitioners coming from elsewhere it will take a longer time, but the process is always the same. We don't discriminate.

The case, even though it has overwhelmed many, it does not overwhelm the judiciary because we take it as part of our duties under the law. So, in hearing those cases, we are hearing the prosecution, we are hearing the defence impartially and independently making our assessments on all those motions coming before us.

We are looking forward to the trial where evidence will be led for us to have a say on the finality of the subject whether these people are guilty or should be acquitted because the case has not been proven by the prosecution beyond a reasonable doubt. We will do our jobs in accordance with our Constitution.

The Interview » Be a reporter: Write and send your article » Subscribe for news alert
Tags: International Day of Democracy