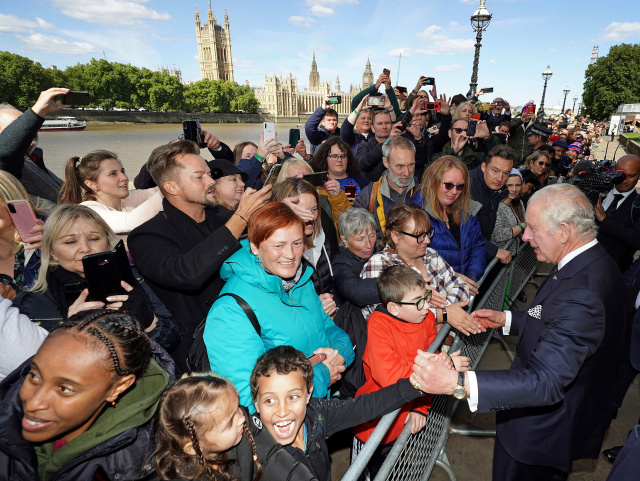 Britain's King Charles III talks with members of the public waiting in the queue to pay their respects to Queen Elizabeth II, Lying-in-State at the Palace of Westminster, on the South Bank in London on September 17, 2022. Queen Elizabeth II will lie in state in Westminster Hall inside the Palace of Westminster, until 0530 GMT on September 19, a few hours before her funeral, with huge queues expected to file past her coffin to pay their respects. (Photo by Aaron Chown / POOL / AFP)

(AFP) - King Charles III and his heir Prince William on Saturday staged an unscheduled London walkabout to the delight of people queueing all night to see Queen Elizabeth's coffin, ahead of her grand state funeral.

Cries of "God save the king" came from the riverside crowd opposite parliament as the new monarch and his elder son thanked the well-wishers waiting patiently in line, before Charles went on to meet some of the many world leaders arriving for Monday's lavish send-off.

"I'm so happy. He was so calm, and friendly and he was so gentle," said Geraldine Potts-Ahmad, a secretary in her late 50s, as she struggled to contain her emotions after shaking hands with Charles.

"He is going to make the best king. That gentleness and that tenderness, I saw the queen in that."

The queen's death on September 8 aged 96, after a record-breaking 70 years on the throne, has sparked an outpouring of emotion.

Tens of thousands of people are braving waits that have stretched to more than 25 hours to view her flag-shrouded coffin. Volunteers handed out blue blankets to guard against the night-time chill.

Princes William and Harry were later set to lead a vigil of Queen Elizabeth II's eight grandchildren on the four corners of the coffin, as it lies in state inside parliament's Westminster Hall.

The sombre occasion was briefly disrupted late on Friday when a man burst out of the line and approached the coffin, which sits topped with the Imperial State Crown.

A live television feed of the mourners briefly cut away around 10:00 pm (2100 GMT) as police detained the man, two hours after Charles and his three siblings had held their own vigil in the cavernous hall.

But otherwise, the mood remained reverential on Saturday as people walked slowly past the catafalque, bowing their heads, clasping their hands in prayer, or saluting in the case of some medal-bedecked veterans.

Some 435 people in the queue have needed medical treatment, often for head injuries after fainting, the London Ambulance Service said.

But Alison Whitham, an ex-nurse from Ashby in the English Midlands, said her 14-hour wait was well worth it after paying her final respects in the hall.

"The fact that you could just concentrate, with nobody holding phones up, was so lovely."

Police are mounting Britain's biggest-ever security operation for Monday's funeral, as hundreds of dignitaries including US President Joe Biden are set to jet in.

Less than two weeks since she was appointed by the late queen, British Prime Minister Liz Truss was on Saturday beginning a packed series of meetings with world leaders including New Zealand counterpart Jacinda Ardern and Australia's pro-republic Anthony Albanese.

Ardern, Albanese and Canadian Prime Minister Justin Trudeau were among leaders who paid their own respects at Westminster Hall. US President Joe Biden was expected to do so Sunday.

Charles himself was on Saturday scheduled to meet the prime ministers of the Commonwealth realms -- the 14 former colonies over which he now reigns in addition to the United Kingdom.

From Australia and Canada to Jamaica and Papua New Guinea, they have formally proclaimed him their new sovereign.

But republican movements are gaining ground in many of the countries, and efforts to keep them all in the royal fold will likely be a feature of his reign.

After visiting Wales, Charles joined the 15-minute vigil with his siblings -- Princess Anne, Prince Andrew and Prince Edward -- around their mother's casket on Friday night.

They stood, silent and eyes lowered, while members of the public filed past.

The vigil will be repeated on Saturday evening by the grandchildren, including Prince William and his estranged younger brother Harry.

The duke of Sussex -- who served two tours with the British Army in Afghanistan -- has been given special permission by his father to wear military uniform despite no longer being a working royal.

The move appeared to be the latest olive branch offered to Harry by Charles after the duke and his wife Meghan, now living in California, accused the royal family of racism.

The personal sorrow of the queen's family has been playing out in the glare of intense international attention.

But her youngest son Edward said: "We have been overwhelmed by the tide of emotion that has engulfed us and the sheer number of people who have gone out of their way to express their own love, admiration and respect."

The public have until 6:30 am (0530 GMT) on Monday to view the coffin before the queen is honoured with Britain's first state funeral in nearly six decades.

The spectacular ceremony at Westminster Abbey -- expected to be watched by billions around the globe -- will see 142 sailors pulling the gun-carriage bearing her lead-lined coffin.

It will be attended by more than 2,000 guests, but leaders from countries at loggerheads with the UK such as Russia, Belarus and Afghanistan have not been invited.