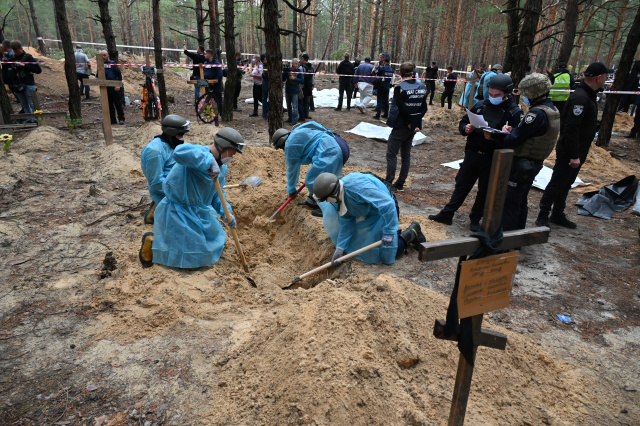 Forensic technicians dig a grave in a forest on the outskirts of Izyum, eastern Ukraine on September 16, 2022. Ukraine said on September 16, 2022 it had counted 450 graves at just one burial site near Izyum after recapturing the eastern city from the Russians. (Photo by SERGEY BOBOK / AFP)

(AFP) - About 450 graves were counted at one burial site near the eastern Ukraine city of Izyum which was recently recaptured by Kyiv's forces, a senior presidential aide said Friday.

"Four hundred and fifty graves... This is just one of the mass burial sites discovered near Izyum. In the occupied territories, rampant terror, violence, torture and mass murders have been reigning for months," Mykhaylo Podolyak said.

He published a photo on social media showing rows of wooden crosses and recently dug mounds in a wooded area, along with the claim.

The statement comes after Ukraine President Volodymyr Zelensky said in an evening address to the nation that a "mass grave" had been discovered near Izyum.

But he did not give details about the number of bodies that had been discovered or any indication of whether they were civilians or military personnel, or the cause of any of the deaths.

Russia has been accused of carrying out attacks on civilians that amount to possible war crimes, particularly in towns outside the capital of Kyiv.

Dozens of civilians bearing signs of extrajudicial killings were found in places like Bucha, outside the capital, after they were recaptured by Ukraine's forces in March.

The recapture of Iyzum and swathes of territory in the eastern Kharkiv region has delivered a serious blow to Russia's ambitions to capture and hold the eastern Donbas region of Ukraine.