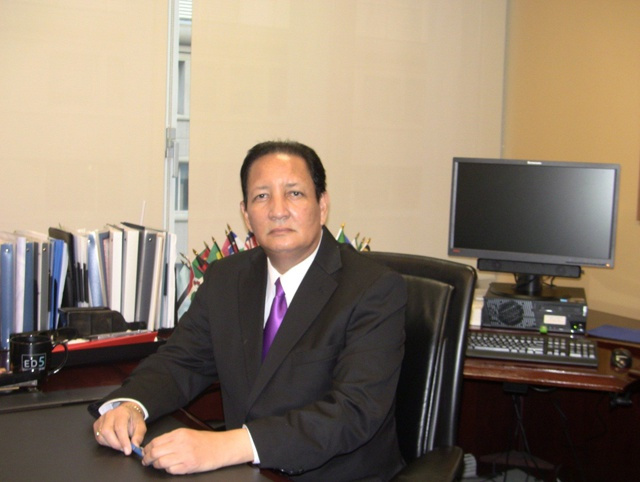 Larose assumed the office of Minister for Finance, Trade and Economic Planning on November 1, 2016 until 2018. (Ministry of Finance)

The Seychelles' President, Wavel Ramkalawan, has sent a message of condolence to the wife and family of former finance minister Dr. Peter Larose following his passing, State House said on Tuesday.

In his message, Ramkalawan said that Larose served his country with devotion and professionalism in various capacities and made significant contributions to his homeland, particularly in finance.

"He will be remembered for his hard work and commitment in everything that he did. At all times he put his country first. This was clearly exhibited when his nomination as minister was approved unanimously by members of all political parties in the National Assembly. Our thoughts of comfort and courage go out to all his loved ones during their time of loss," said the President.

A message of condolences has also been sent by the Ministry of Finance, National Planning and Trade.

In his tribute to Larose, finance minister Naadir Hassan said, "Our career crossed when I was at the Central Bank of Seychelles and when he was Minister for Finance, Trade and Economic Planning. Throughout his career, Dr. Larose has shown tenacity, commitment, discipline and seriousness."

Larose assumed the office of Minister for Finance, Trade and Economic Planning on November 1, 2016 until 2018. He worked within the Ministry of Finance, as well as the Central Bank of Seychelles.

In 2008, his career achievements locally, was recognised internationally, when he joined the World Bank as an adviser. He was promoted to senior adviser in 2010 and assumed the position of Alternate Executive Director in 2012.

Larose became the Executive Director of African Group 1 Constituency in 2014 where he represented 22 African countries.

Hassan said that "Dr. Larose took great pride in furthering and sharing his extensive experience in his chosen fields of banking, finance, economics and accounting. His career should be a model for young Seychellois who are ambitious and serious about furthering their career, not only in Seychelles but internationally. As a nation, we are proud of Dr. Larose's career achievements."