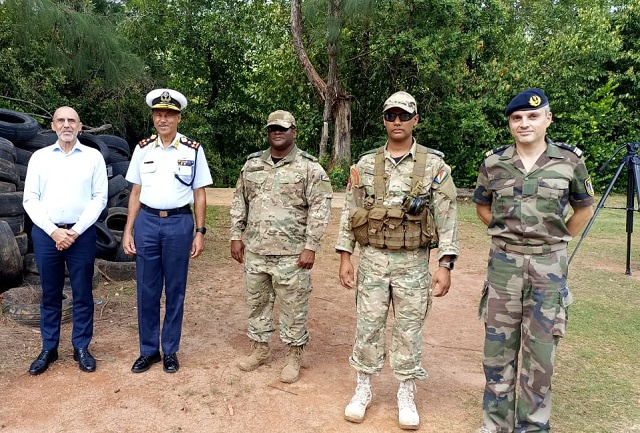 The outgoing French Ambassador to Seychelles, Dominic Mas, says that the two country's cooperation will continue especially in areas related to maritime security during a joint military training exercise on Tuesday.

The joint military training is taking place at the Seychelles Recruit Training Centre at Barbarons, in the west Mahe, the main island, by French Special Forces officers from Reunion and the Seychelles Defence Forces (SDF).

The bi-annual military exercise is aimed at building the capacity of both forces in the fight against piracy, illegal fishing, smuggling as well as narco-trafficking.

"This exercise is part of the continuing relationship we have with the SDF, where the French Special Forces, based in Reunion Island, are working helping in the training of various aspects, including shooting and close-combat," said Mas.

He explained that "this exercise will look at improving the security of this region of Indian ocean, be it maritime or sovereign, as well as the fight against drug trafficking."

Mas, who will be leaving his post in Seychelles soon, said the cooperation is indispensable for both nations, along with other regional countries as they look to continue battling against the problems the region is facing.

The ambassador visited the training centre in the company of the Seychelles' Chief of Defence Forces, Brigadier Michael Rosette, and witnessed some of the training sessions, while he was also given the chance for target practice at the shooting range.

Speaking to reporters, Major Archil Mondon, the SDF public relations officer, said, "We are looking to develop a new team of instructors, where this partnership with the French military has been going on for a while, where they have helped up in the past and this new batch of instructors will help to produce more soldiers for Seychelles."

He added that the instructors will work with the special forces division, where their role will be to train, develop and assess recruits, to ensure that they can be part of the unit.

The training will continue during the week and the French Ambassador has stated that despite the fact that he cannot speak on behalf of his successor, the partnership between Seychelles and France is one that is expected to continue.

The two nations have a long-standing partnership, where the Reunion-based Armed Forces in the Southern Indian Ocean (FAZSOI), regularly participate in the 'Cateau Noire' exercise against maritime crime.