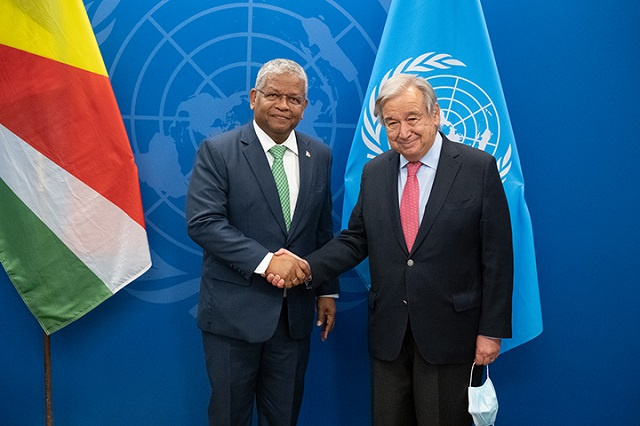 Ramkalawan with United Nations Secretary-General, Antonio Guterres, on the side-lines of the 77th UNGA. (State House)

"Seychelles believes fundamentally in the United Nations and the principles ingrained in the UN Charter. For us, this multilateral institution remains an indispensable forum where the entire world can meet to deliberate on international development matters concerning us all, and where we all have a voice irrespective of our size or economic power. This is especially important for Small Island Developing States like ourselves," said Ramkalawan.

The UN Secretary-General noted that Seychelles is rich in marine biodiversity, which makes it a fundamental country contributing toward global equilibrium.

He said that this is a great contribution to humanity and to the world.

Meeting with UAE Minister of State for Foreign Affairs

The United Arab Emirates has confirmed that it will be implementing phase two of the Seychelles Barbarons Housing project comprising 40 units, according to a State House press release.

The UAE Minister of State in the Ministry of Foreign Affairs, Sheikh Shakhboot Nahyan Al Nahyan, made the statement in a bilateral meeting with President Ramkalawan on the sidelines of the UNGA.

The housing project started in 2015 through a grant of $9 million from Abu Dhabi and the first phase covered Takamaka and Barbarons.

"Seychelles is keen to engage with the UAE in new fields of cooperation of mutual interest and we are incredibly grateful for the continuously growing bonds of friendship and partnership that exist between our two governments," said Ramkalawan.

The UAE Minister of State expressed his government's willingness to further enhance the country-to-country partnership while extending their support to an exemplary island nation such as Seychelles that is leading in key domains not only in Africa but on the worldwide platform.

The UAE agreed to fund a drug rehabilitation centre in January 2020 at a total cost of $3.6 million. Plans for its construction at the former Mont Royale rehabilitation site in the central Mahe district of Mont Fleuri, started in April last year.

The meeting between President Ramkalawan and Sheikh Nahyan Al Nahyan also served as an important opportunity for the two leaders to review and agree on the way forward and expected timeline for the agreed projects, said State House.