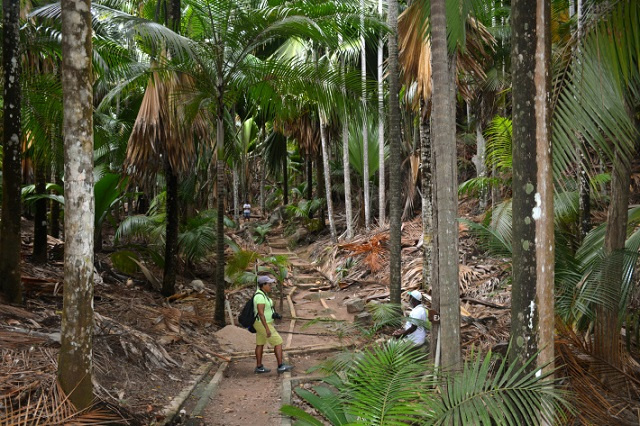 A recent marking exercise of male coco de mer trees by the Seychelles Islands Foundation (SIF) at the Fond Ferdinand reserve on Praslin has shown that its population is stable.

The SIF, which manages the reserve, made the announcement recently following the completion of the exercise which began in October 2021 and ended in September this year. The exercise was a precursor to a census the Foundation plans to hold later this year.

The coco de mer, the world's biggest nut, is endemic to Seychelles, a group of 115 islands in the western Indian Ocean. It grows naturally only on two of Seychelles' islands, Praslin and Curieuse. On Praslin, it is found at the Vallee de Mai special reserve, which is one of the island nation's UNESCO World Heritage sites, and at the Fond Ferdinand reserve.

The nut is listed as an endangered species by the International Union for Conservation of Nature (IUCN).

The officer in charge of the project at SIF, Dr Annabel Constance, told SNA that the Foundation "is researching the two natural populations of coco de mer to update information on the population, reproductive biology, and distribution of the threatened trees."

During the marking exercise, the SIF research team marked unidentified male coco de mer trees and re-marked those known from previous surveys, the last held in 2004.

Travelling through difficult terrains, the officers involved went around in sections to locate unidentified trees efficiently by walking in a straight line in predetermined sections and assigning consecutive numbers to trees as well as identifying if male or female through paint.

In addition to being allocated a number, their GPS positions were also recorded.

In total, the research team marked 45 new male trees and 901 were re-marked, although no dead trees were found during the survey.

In September 2020, SIF, which manages the Vallee de Mai, assumed the responsibility for Fond Ferdinand and extended its conservation mandate to one of Praslin's and Seychelles' most cherished protected areas.

The Fond Ferdinand reserve located at Grand Anse Praslin was opened in 2013. It covers 122 hectares of land and is six times larger than the Vallee de Mai.

Now that the marking exercise has been completed, SIF will go ahead with the census in October, as part of SIF's Franklinia Foundation-sponsored project which is "Increasing the resilience of Seychelles' flagship tree species coco de mer Lodoicea maldivica."

It will cover all reproductive male and female immature plants as well as trees with trunks but no flowers in Vallee de Mai and Fond Ferdinand.

Constance also explained that "the results will show what is the size and height on average for trees within and across the different populations, where it is distributed, where it is densest, which areas might be struggling and whether the total population is increasing, stable or in decline thereby providing critical information for management and conservation."