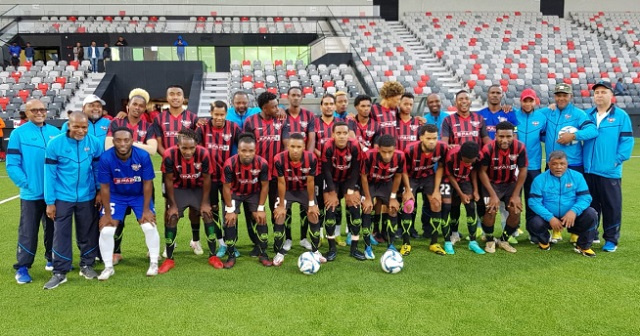 The Anse Aux Pins-based club progressed to the second preliminary round of the CAF Confederation Cup. (Seychelles Nation)

Seychelles' St. Michel football club is looking forward to its match against Daring Club (DC) Motema Pembe from the Democratic Republic of Congo in October.

The Anse Aux Pins-based club progressed to the second preliminary round of the Confederation Cup of the  Confederation of African Football (CAF) by a walk-over after their opponent Inter Littoral Academy of Guinea Equatorial failed to turn up for the first leg match.

St. Michel's spokesperson, Andrew Jean-Louis, told SNA that the players are looking forward to playing at this level.

"For a while now, we have been absent in this competition, especially this new generation of players. They have never had the opportunity. Some of the older ones had the opportunity of passing the preliminary round. The players we have are looking forward to playing at this level.

The match for the preliminary round was scheduled to be played on Friday, September 12 in the Mauritius Sports Complex as Seychelles' Stad Linite - the national stadium - is still unable to host international matches until repairs are complete.

Inter Littoral did not turn up for the match and through a letter to CAF, the Guinean side said the team had flight difficulties and could not arrive in Mauritius on the match day.

According to the CAF rules, "if for any reason whatsoever, a team withdraws from the competition or does not report for a match ‒ except in case of force majeure accepted by the organising committee ‒ or if it refuses to play or leaves the ground before the regular end of the match without the permission of the referee, it shall be considered as loser and shall be eliminated from the competition."

Jean-Louis said that although the match did not take place "we managed to have a friendly match in Mauritius. Our players have geared up for the next match.  Although we do not know Daring Club from Congo, we are conscious that this match will be at a higher level and we are going to give it our best."

St. Michel will be playing both the first and second leg of the match away from home and the team sees it as a disadvantage.

"Definitely this will have an impact on our players.  When you play at home you have many advantages and the environment is more conducive. We are used to our weather conditions compared to our opponent so we have home advantage and we also have the backing of our supporters," he added.

Jean-Louis pointed out that the situation in Seychelles concerning its main stadium is "saddening and I implore those responsible to do something about it as soon as possible. We had ample time to fix the Stad Linite but now the competition is here and there is nothing we as a team can do about it but we will do the best we can."

St. Michel will meet Daring Club (DC) Motema Pembe (DCMP) of the Democratic Republic of Congo for the first leg on October 7.

St. Michel has gone past the first-round hurdle before, since they started participating in the CAF club competitions in 1997 but has so far not reached the group stage.

In the 2001 Champions League qualifying rounds, St. Michel reached the second round after defeating AS Fortior of Madagascar 3-1 in the preliminary round. The team progressed to the first round and defeated AS Marsouins of Reunion on the away goals rule after a 4-4 draw (2-3 away loss and 2-1 home win) in the preliminary and first rounds.

The team was eliminated in the second round losing 6-0 against Egyptian side Al Ahly.

Seychelles' other club in the CAF champions league, La Passe is still awaiting CAF's decision after their opponent Volcan Club de Moroni of Comoros did not turn up for the second leg match on Friday, September 16.

La Passe lost the away leg of the preliminary round 1-0 to Volcan Club de Moroni.

The friendly is part of a cooperation agreement between the two nations that are both among the smallest on their respective continents. The aim is to continue to empower local players and also give the national teams chances to go up against European opposition in the future.

Led by coach Vivian Bothe, the team is expected back in the country on Saturday.

Sport » Be a reporter: Write and send your article » Subscribe for news alert
Tags: Confederation Cup, Confederation of African Football