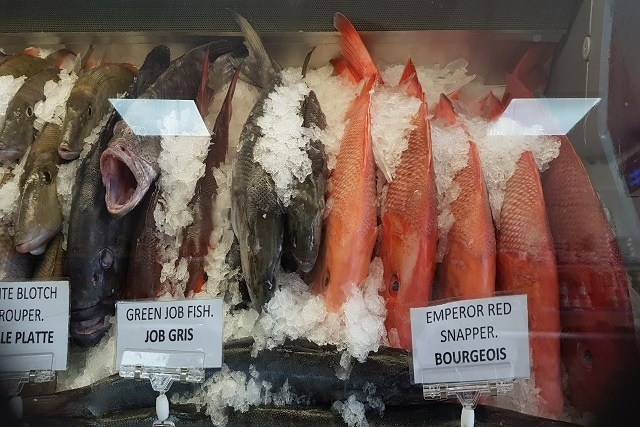 The ban will apply to red snappers (bourgeois) and groupers (job fish) below 32 cm, targeted by hand line fishery.

(Seychelles News Agency) - A ban on fishing certain fish species that have not reached sexual reproductive maturity will start on October 1 as the Seychelles Fishing Authority takes measures to protect the fish stocks on the Mahe plateau.

The ban will apply to emperor red snappers (bourgeois) and green job fish below the 32 cm size limit, targeted by hand line fishery and a ban on spawning aggregation sites for rabbitfish in the trap fishery. Fishermen will not be allowed to set traps overnight on spawning sites during the spawning season between September to April and three days before and three days after a full moon.

The announcement was made during a meeting on Thursday where the implementation committee for the Mahe plateau trap and line fishery co-management plan (ICC), a committee made of up several partners including fishermen's associations met to iron out the details of the upcoming measures being placed an on certain fish species.

"We have decided to take severe actions as on October, 1 because during all that time we had no control on fishing and it would not have been fair to impose measures on people and punish them all of a sudden," said Darell Green, vice chair of the committee, who was also representing the Praslin fishermen's association.

"People have had until September 2022 to adapt to the new law, which I believe was enough time for fishermen to realise that we need to work for our tomorrow," said Green.

Local authorities will start implementing the measures in earnest as of October 1, following stock assessment results showing overfishing of certain species on the plateau.

The management plan was set up following concerns raised by fishermen over the decreasing catch rates and the decreasing sizes of the fish species especially the red emperor snapper and the green job fish.

The plan to protect the species and the committee set up to implement the plans (ICCP) brings together all those concerned such as fishermen associations, the government and representatives from the tourism sector among others.

As of October 1, those found with the endangered fish smaller minimum size limit of 32 cm fork length for emperor red snapper and green job fish  – after a year of grace period, will be liable to a fine not exceeding SCR 20,000 ($1,541).

Green said that the measure is not one of punishment, but rather "to guarantee that our children have bourgeois and job fish to eat in the future and for fishermen to be able to continue fishing in order to sell. If we kill all the small ones, we will not have the bigger fish later on."

To ensure that fishermen abide by the law, the Seychelles Fishing Authority (SFA) has been given the power to monitor and enforce the measures.

"So far we have carried out some soft enforcement where we have gone to landing sites and inspected boats," said the head of monitoring and enforcement at SFA, Johnny Louys.

"While this also applies to vessels taking part in sports fishing, we have been mainly focusing on commercial fishing boats; our results from the risk assessment have shown us that these are the areas of higher risk that we would find instances of non-compliance," he added.

There are about 40 landing sites where fishermen bring in their catches that the SFA officers are inspecting randomly.

During the meeting, one of the main concerns raised was that those involved in sports fishing were more prone to not complying with the law and this is also where there was a lack of monitoring and enforcement.

"Since the concern was raised, we will look into the possibility of adjusting our plans and focus more on sports fishing boats and recreational fishing as well,' said Louys.

To ensure the monitoring aspect is one that is well covered, SFA will be working with its other partners since it has manpower constraints.

"We have other instruments and requirements that we have to implement, which is why it is always a challenge although we do maximise the resources we have at our disposal," said Louys.

An extensive education campaign is set to start in the coming days to inform members of the public of the consequences of breaking the law.

This will include a 45-minute-long documentary, television adverts and bus wrappings among others will be used to inform and educate members of the public about the changes and measures to be implemented.

The plan will be implemented in two phases over 24 months to ensure key measures can be introduced immediately, while others are done over time to allow for their comprehensive development before coming into force.

"On the fishers' part we are ready, as fines will be imposed as of the first of October, whether we like it or not," said the chairperson of the Fishers and Boat Owners Association, Nancy Onginjo.

She explained that everyone will have to abide by the rules so as to protect the species "as we also form part of the committee implementing the plan."

Fisheries » Be a reporter: Write and send your article » Subscribe for news alert
Tags: Fishers and Boat Owners Association