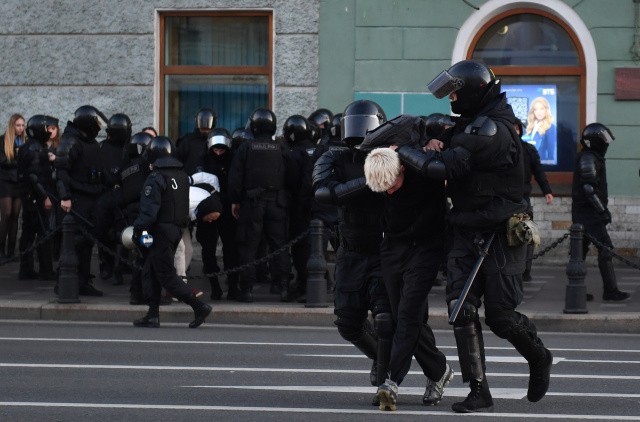 Police officers detain a man in Saint Petersburg on September 24, 2022, following calls to protest against the partial mobilisation announced by the Russian President. Russian authorities detained more than 700 people, on September 24, 2022, at protests against partial mobilisation this week ordered by President Vladimir Putin, according to independent monitoring group OVD-Info. (Photo by AFP)

(AFP) - Russian President Vladimir Putin on Saturday signed amendments toughening penalties for voluntary surrender, desertion and refusal to fight by up to 10 years in prison, just days after ordering a partial mobilisation.

The announcement of the mobilisation of 300,000 reservists on Wednesday sparked protests across Russia and a fresh exodus out of the country.

A day before, Russia's parliament had approved amendments toughening penalties for military crimes in times of mobilisation.

Now that the legislation is signed, servicemen who desert, surrender "without authorisation", refuse to fight or disobey orders can face up to ten years imprisonment.

Looting will be punishable by 15 years imprisonment.

The changes come as the Kremlin seeks to bolster the ranks of its army fighting a military operation in Ukraine.

A separate law, also signed on Saturday, facilitates access to Russian citizenship for foreigners who enlist in the Russian army.

Foreigners who spend at least a year in the Russian army will be eligible to request citizenship, bypassing the normal requirement for five years of residency in the country.

On Tuesday Moscow mayor Sergey Sobyanin announced the opening of a recruitment centre in the Sakharovo migration centre, an important passage point for migrants.

Even before the law came into effect, Kyrgyzstan and Uzbekistan had warned their citizens not to take part in any armed conflicts.