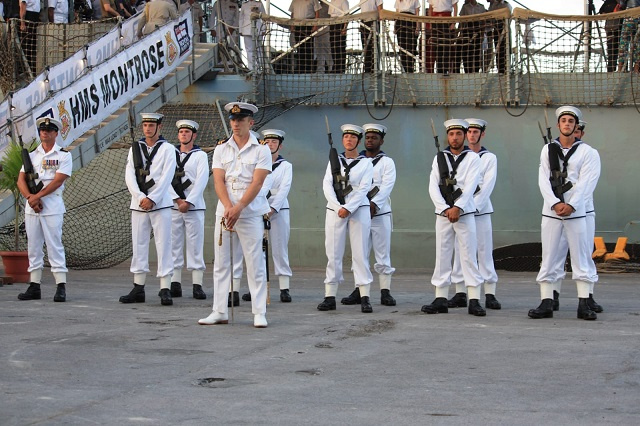 HMS Montrose arrived in Seychelles from Bahrain where it has been based for the last three. (British High Commission)

The training, which started in Seychelles last week, includes search and rescue, maritime law and information sharing among others.

He made the statement on Friday evening during a reception on board HMS Montrose.

"This multilateral exercise is designed to enable our respective forces and other partners to meet face to face and learn from one another. This training will produce results in real life making a difference to those who use the sea for their livelihood and for legitimate purposes," said Ferrari.

HMS Montrose arrived in Seychelles, an archipelago in the western Indian Ocean, from Bahrain where it has been based for the last three years fighting illicit narcotics in the area.

The vessel has seized almost two tonnes of narcotics amounting to the sum of two SCR2 billion - a feat possible as the vessel is armed with anti-narcotic equipment such as sensors and a wildcat helicopter.

British High Commissioner Patrick Lynch said the vessel's visit will further support Seychelles in its efforts to combat threats to maritime security in the region which is also part of the United Kingdom's (UK) commitment to maintaining peace and stability.

"On land and at sea, we stand together as democratic partners. The UK is very proud to pursue an agenda that seeks to protect and promote the independence, sovereignty, democracy and prosperity of these islands," he added.

HMS commanding officers Clair Thompson and Paul Irving are the first to lead a Royal Navy vessel to Seychelles since the British Royal Navy frigate HMS Richmond was in Port Victoria in June 2015.

The warship is a Type-23 Duke class of frigates named after the Duke of Montrose. It was commissioned into service in June 1994 and has a crew of 200 men and women who work on a four months rotation while it is based in Bahrain.

Seychelles has an Exclusive Economic Zone (EEZ) of 1.4 million square metres and is recently taking measures to tighten maritime security.

During the last Southern African Development Community (SADC) Summit for heads of state and government held in the Democratic Republic of Congo, President Wavel Ramkalawan said that maritime security continues to be a threat to the safety of Seychelles and is becoming one of the most significant issues for the whole African continent.