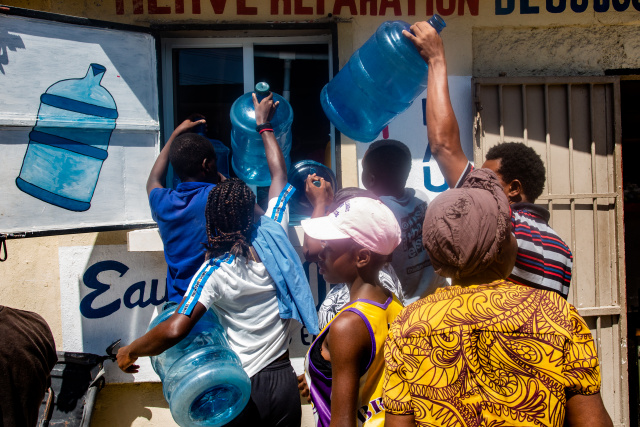 (AFP) - Officials described a "humanitarian catastrophe" in Haiti to the UN Security Council Monday, as the nation hits "new levels of desperation" after two weeks of violence and attacks on food aid warehouses.

Protests and looting have rocked the already unstable country since September 11, when Prime Minister Ariel Henry announced a fuel price hike; he says subsidies are too expensive for one of the world's poorest states.

"An economic crisis, a gang crisis and a political crisis have converged into a humanitarian catastrophe," Haiti's UN envoy, Helen La Lime, said during an emergency Council meeting.

"Before the current bout of civil unrest, some 4.9 million Haitians were in a state of humanitarian need. In the last two weeks alone, attacks on WFP (World Food Program) have resulted in the loss of some 2,000 tonnes of food aid valued at close to $5 million, that would have collectively supported up to 200,000 of the most vulnerable Haitians over the next month," she charged.

She also said that the fuel terminal in Varreux has been in a "state of siege" for more than a week, blocked off by criminal gangs.

It caused the largest industrial park in Haiti, Caracol, to cease operating, "which could cause the loss of 12,000 jobs," said Haitian Foreign Minister Jean Victor Geneus, who also attended the meeting.

He noted that private companies are threatening to leave the country and that the return to school, already postponed to October 3, is now "hypothetical."

"Instead of the progress we were hoping for and dreaming of, today the situation in Haiti has sadly reached new levels of desperation," she told the Council, noting that in less than a year, the price of a basic food basket has increased 52 percent.

"We expect food security to further deteriorate this year, surpassing the record high of 4.5 million people estimated to face crisis or worse levels of acute food insecurity, including 1.3 million people in emergency," she said.

She added that the instability makes it both difficult and dangerous to implement the aid program on the ground, particularly due to concerns about the looting of warehouses that held supplies for the 2022 hurricane season.

Geneus said that "except for isolated cases," the violence was "generally under control and calm has returned to several parts of the country."

He called for "robust support" from the international community for the Haitian police against armed gangs.

In July, the Security Council adopted a resolution asking UN member states to ban the transfer of small arms to gangs operating in Haiti, without going so far as to enforce an embargo demanded by China.

"It is necessary for the Council to turn this voluntary measure into a mandatory one," Chinese Ambassador Geng Shuang said again on Monday.

The United States and Mexico, which drafted the July resolution, are working on a new text "proposing specific measures to enable the Security Council to address many challenges facing the people of Haiti," said US Ambassador Jeffrey DeLaurentis.

Mexican Ambassador Juan Ramon de la Fuente warned that "if gang violence is not stopped, it will not be possible to stabilize the country."