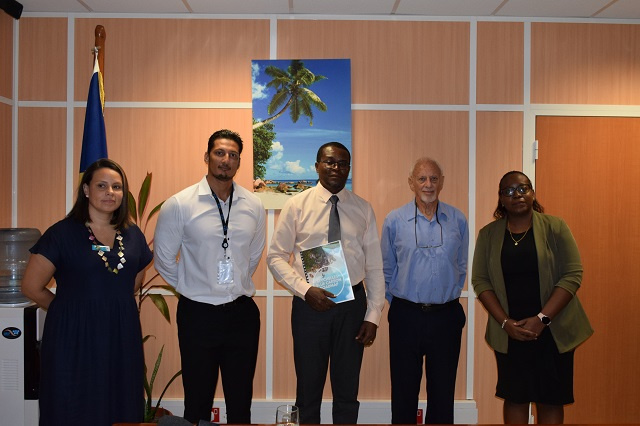 The report was handed to the Minister for Agriculture, Climate Change and Environment, Flavien Joubert, (middle) on Monday (Seychelles Nation)

The Seychelles Blue Carbon Roadmap report which highlights opportunities and where the island nation should be headed in this field was handed to the government on Monday.

Developed by the James Michel Foundation, created by the former president of the country, in collaboration with Deakin University from Australia, the Seychelles Blue Carbon Roadmap was financed by the Blue Grants Fund from the Seychelles Conservation & Climate Adaptation Trust (SeyCCAT).

The report was handed to the Minister for Agriculture, Climate Change and Environment, Flavien Joubert, who said in a short address that the work done will be of benefit to Seychelles.

"We've talked about many things that we would do and this roadmap has given us important information but we need to work out a proper climate strategy and this would fit very well within the strategy for action," said Joubert.

He added that "one of the things that I would like to do very soon is set up a climate council at the national level, a longstanding promise that remains unresolved."

Blue carbon refers to the carbon that is captured and stored by marine and coastal ecosystems and it is important because it can capture carbon up to four times faster than terrestrial forests.

The Seychelles Blue Carbon Roadmap also expects to help the government in fulfilling some of the commitments made.

"It will be up to the government to see how they are going to fulfill their commitments that were given via the UNFCC agreement in which Seychelles has pledged to protect 50 percent of its seagrass and mangroves habitat by 50 percent in 2025 and a 100 percent by 2030. I really hope that this document will be at the forefront in mitigating the right decisions," Seychellois scientist Ameer Ebrahim told SNA.

Seychelles has one of the most biologically diverse marine ecosystems on the planet while the carbon ecosystems cover over two million hectares, with seagrass beds accounting for 99 percent of the blue carbon extent. The other carbon ecosystem in the island nation is mangrove forests with more than 80 percent located within the Aldabra atoll.

Ebrahim said that "Seychelles will be heading to COP27 in November this year and hopefully this roadmap document will add some leverage moving forward for the Seychelles government."

This was echoed by the chief executive of the James Michel Foundation, Debbie Monthy.

She said that the document is a necessary strategic investment into understanding Seychelles' Blue Carbon future and will allow the country to achieve such commitments and to work towards future ones.

As a small island state in the western Indian Ocean, Seychelles is vulnerable to the effects of climate change and having the proper resources poses a challenge.

"I don't think we are limited when it comes to the amount of funding but rather we are limited in the amount of technical capacity that exists within the country. By having positive projects such as these coming forward showcasing Seychelles, we are attracting international funding. We have the right mechanisms in place we just need that technical capacity and expertise to turn this project into reality," he told SNA.

This was highlighted by Minister Joubert who said that Seychelles will need to have a climate laboratory, which is a grouping of scientists and people who have particular interests in climate topics.

"This is one of the things we need to look at in developing our local university. Climate and oceans are the strong points for Seychelles so we need to bring together all those with the necessary skills. We can have the idea of a climate lab developed further assisted by people who are already engaged to get it going," he said.