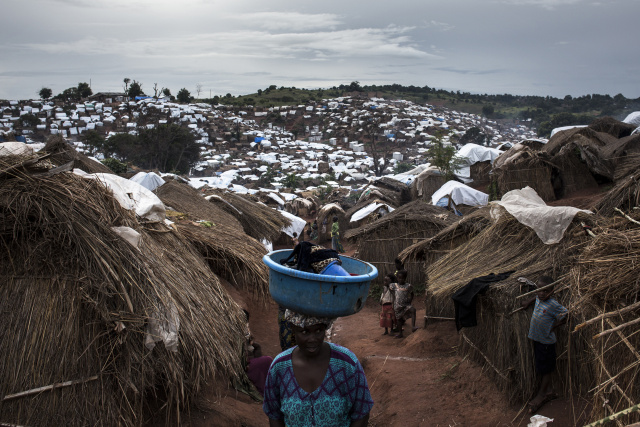 A Congolese woman walks through a camp for Internally Displaced Persons (IDP) on March 20, 2018 in Kalemie, Democratic Republic of the Congo. An ongoing conflict between the Pygmies and Bantus has displaced sixty seven thousand people around Kalemie and according to Humanitarian agencies up to six hundred and fifty thousand at the peak of the crisis in Tanganyika Province. (Photo by John WESSELS / AFP)

(AFP) - The United Nations said Tuesday almost 6,000 Congolese refugees who fled to Zambia in 2017 have returned home since the launch of a voluntary repatriation scheme last year.

Thousands of people crossed into Zambia from the Democratic Republic of Congo five years ago, fleeing fighting between government soldiers and militia groups, as well as inter-ethnic clashes.

While parts of the conflict-ridden central African country remain unsafe, the situation in some areas, including the southern Haut-Katanga region, has stabilised, allowing for returns, the UN refugee agency (UNHCR) said.

The returnees, most of whom were children, were transported from the Mantapala refugee settlement in northern Zambia to the DR Congo by bus, it said in a statement.

"They have expressed excitement and joy at returning home and looking forward to reuniting with family and friends and starting their lives anew," the agency added.

More than 11,000 refugees were registered to go back by the end of the year, the UN agency said.

Nearly a million Congolese have found shelter in neighbouring countries, with Zambia hosting more than 60,000 refugees, asylum seekers and former refugees from its northern neighbour.