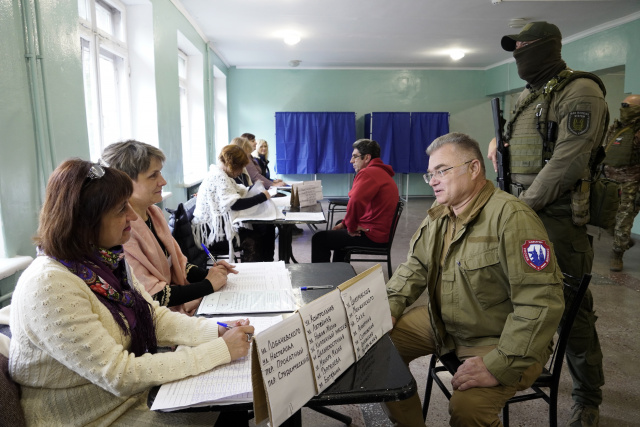 Konstantin Ivashchenko (3R), former CEO of the Azovmash plant and appointed pro-Russian mayor of Mariupol, visits a polling station as people vote in a referendum in Mariupol on September 27, 2022. Western nations dismissed the referendums in Kremlin-controlled regions of eastern and southern Ukraine as the voting on whether Russia should annex four regions of Ukraine started on September 23, 2022. (Photo by STRINGER / AFP)

(AFP) - The Moscow organised votes in four occupied regions in Ukraine on annexation by Russia are a "sham" and "a blatant violation of international law," NATO's chief Jens Stoltenberg said Tuesday.

Stoltenberg tweeted that he spoke with Ukrainian President Volodymyr Zelensky "and made clear that NATO Allies are unwavering in our support for Ukraine’s sovereignty and right to self-defence".

"The sham referenda held by Russia have no legitimacy and are a blatant violation of international law. These lands are Ukraine," Stoltenberg said.

His declaration was made on the fifth and final day of the Moscow-organised voting in the Ukrainian regions, where Kremlin-installed authorities were already claiming the uncounted ballots had gone Russia's way.

While NATO is not directly involved in the war in Ukraine, the blowback from the conflict -- especially from soaring energy prices -- has been felt across Europe, where countries make up the bulk of the alliance's membership.

Stoltenberg, later speaking to centre-left EU lawmakers, said that while facts of the pipeline leaks were not yet clear, "Russia is now weaponising energy".

He added that Russia had exacerbated the situation by holding "sham" votes, mobilising more personnel into its army, and threatening nuclear strikes if attempts were made to break its grip on areas it holds.

"All this is a serious escalation of the conflict. Our message is that any use of nuclear weapons is absolutely unacceptable," Stoltenberg said.

"It will totally change the nature of the conflict and Russia must know that the nuclear war cannot be won and must never be fought."

He said that "no-one can tell how long" the war in Ukraine would go on for and that NATO allies were ready "to continue to provide support to Ukraine for the long haul".

To that end, NATO countries need to "ramp up" the production of weapons, after depleting national arsenals to supply Ukraine's armed forces.

He said he chaired an extraordinary meeting of NATO officials in charge armaments early Tuesday and "we are now discussing how we, also in cooperation with the European Union, can ensure that we produce more" to boost supplies to Ukraine and ensure allies' defence.