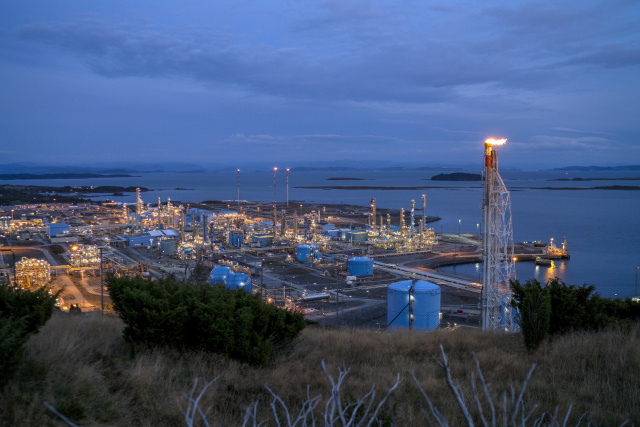 Night view taken on September 28, 2022 shows the Karsto gas processing plant in the municipality of Tysvær in the North Rogaland county, Norway. Dry gas is exported from Karsto through the Europipe II pipeline to Dornum in northern Germany and through the transport systems Statpipe and Norpipe to Emden. Norway, now the biggest supplier of gas to Europe, will beef up security around its oil installations, it said following allegations of sabotage on Nord Stream's Baltic Sea pipelines.
(Photo by Cornelius Poppe / NTB / AFP)

(AFP) - A fourth leak has been detected in undersea gas pipelines linking Russia to Europe, the Swedish Coast Guard said Thursday, after explosions were reported earlier this week in suspected sabotage.

"There are two leaks on the Swedish side and two leaks on the Danish side," a Swedish Coast Guard official said, after three leaks were confirmed earlier this week on the Nord Stream pipelines in the Baltic Sea.

The coast guard said it had been aware of the leak since Tuesday, but could not immediately explain why it had not previously been reported.

Swedish authorities had previously reported a leak on the Nord Stream 1 pipeline northeast of Bornholm.

Denmark has meanwhile confirmed a leak on Nord Stream 2 to the southeast of the island, and another to the northeast above Nord Stream 1.

The vast leaks have caused underwater gas plumes, with significant bubbling at the surface of the sea several hundred metres wide, making it impossible to immediately inspect the structures.

A Swedish Coast Guard search and rescue vessel was patrolling the area.

"The crew reports that the flow of gas visible on the surface is constant," the agency said in a statement.

Suspicions of sabotage emerged after the leaks were detected.

Russia denied it was behind the explosions -- as did the United States, saying Moscow's suggestion it would damage the pipeline was "ridiculous".

The UN Security Council will meet Friday to discuss the matter.

The Nord Stream 1 and 2 pipelines, which link Russia to Germany, have been at the centre of geopolitical tensions in recent months as Russia cut gas supplies to Europe in suspected retaliation against Western sanctions following Moscow's invasion of Ukraine.

While the pipelines -- operated by a consortium majority-owned by Russian gas giant Gazprom -- are not currently in operation, they both still contained gas.