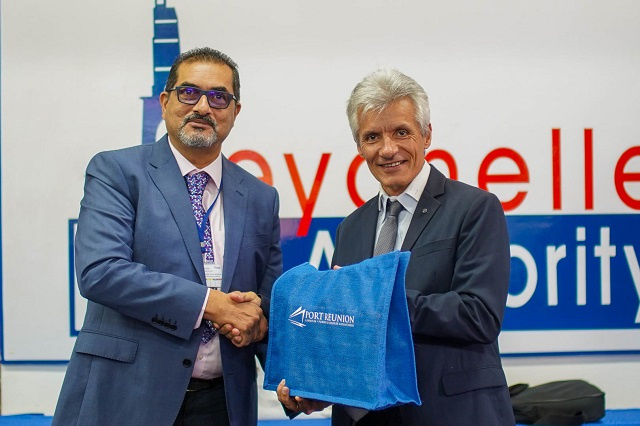 CEO of SPA (left) accepted the chairmanship after a two-day meeting at the Seychelles Ports Authority (SPA).

Seychelles is the new chair of the Association of Indian Ocean Islands Ports (AIOIP) for the next two years, a platform that is important for the island nation as it starts the expansion of Port Victoria.

Seychelles took over the chairmanship from Mauritius after a two-day meeting at the Seychelles Ports Authority (SPA).

Established in 2007 with headquarters in Reunion, a French overseas department, APIOI members include the ports of Comoros, Madagascar, Mauritius, Mayotte and Seychelles. Its aim is to create a cooperation dynamic between the ports of the region in order to better defend their common interests and jointly study their challenges and opportunities.

In his address, the chairman of SPA, Gilbert Frichot, said that the APIOI is now expanding its reach and engaging beyond the Indian Ocean Island states with the aim of enhancing connectivity in the South West Indian Ocean countries.

"This is a subject dear to all members as it addresses shipping connectivity; sharing of information and the implementation of National and Regional Single Window systems. The latter is of further interest to the Seychelles, as it looks at kick-starting the long overdue Port Victoria renovation and extension project," said Frichot.

He added that "SPA fervently believes that Seychelles and other members have and will greatly benefit from the synergy provided by the APIOI platform."

The chief executive of SPA, Sony Payet, told the press that it is better to work as a group so that the voices of the Indian Ocean Ports are heard.

"The idea is to see what cooperation exists between Seychelles and the other ports and to bring in things that will be beneficial to the country so that we move forward," said Payet.

Members of the two-day meeting highlighted skyrocketing shipping costs as one of the challenges they are facing at the moment.

Payet said that as small island states "we are vulnerable and by grouping, we are determining how we can have our voices heard and bringing forward viable ideas in the interest of each region."

Other challenges the ports are facing include maritime security issues such as drug smuggling and trafficking, human trafficking, arms trafficking and illegal fishing.

"Together we need to strengthen our resolve in order to detect, contain and eliminate these maritime ills that can give a bad reputation to our region," said SPA's CEO.

Members also talked about the possibility of luxury tourism which would mean more luxury yachts and cruise ships visiting the region.

General » Be a reporter: Write and send your article » Subscribe for news alert
Tags: Association of Indian Ocean Islands Ports