Air Seychelles to get new domestic service aircrafts in July 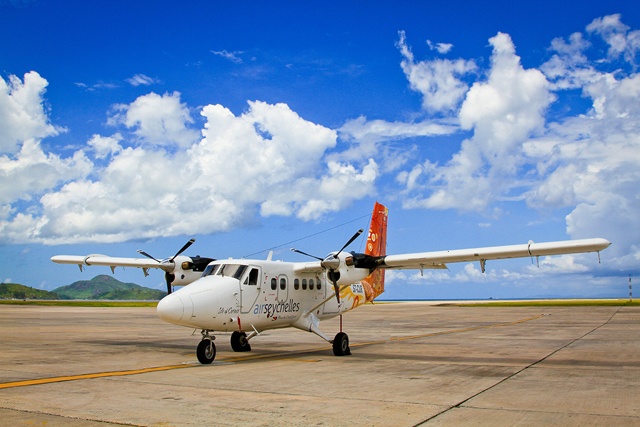 (Seychelles News Agency) - The delivery of two new Twin Otter planes by the middle of the year will speed up the Seychelles national airline's plan to replace its existing domestic fleet.

The new additions will be arriving in the Indian Ocean archipelago in July one year ahead of the planned arrival of three aircrafts, Air Seychelles announced in a press statement issued today.

Air Seychelles said the third Twin Otter aircraft is expected in the country by the third quarter of 2015.

The two new additions will operate on the main domestic route between the main island of Mahe and the second most populated island of Praslin.

They will also fly to other islands with tourist accommodations where Air Seychelles operates at the request of the island operators. This includes Bird, Denis and Fregate islands all found within a 100 km distance from the main island of Mahe as well as D’Arros, a privately owned island lying some 255km from Mahe.

The new 19-seater aircrafts are suitable for such trips as they can land on short and rugged airstrips as well being suitable for operating in a saline and humid environment.

Air Seychelles’ chief executive Manoj Papa has described the early arrival of the Twin Otters as a great milestone for the company’s growth plan.

“They will form the backbone of a rejuvenated Air Seychelles domestic fleet, secure the future of our inter-island services, and help to cement Seychelles tourism and the local economy,” said Papa.

Air Seychelles has been operating Twin Otters since 1980 and currently has three DHC-6 Series 300 aircraft and 1 DHC-6 Series 400 aircraft. The new fleet is yet another step by Air Seychelles to diversify its domestic services following last Wednesday announcement of the start of the airline’s first inter-island domestic cargo service for the benefit of hotels on Praslin.