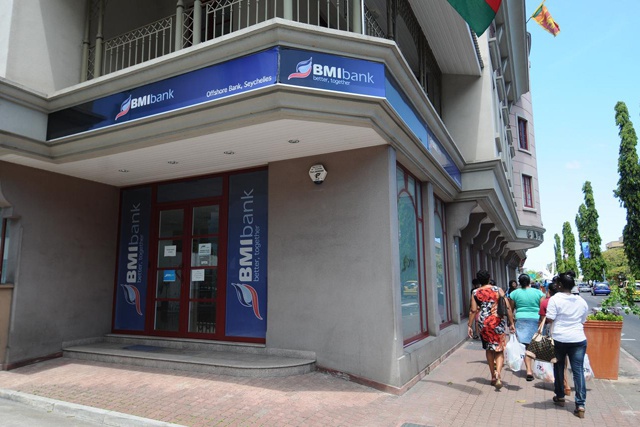 The offices of the Bank of Muscat International offshore (BMIO) are located in the Capital City Building in Victoria. (Patrick Joubert, Seychelles News Agency)

(Seychelles News Agency) - Scarcely three weeks after the announcement that relations between the Bank of Muscat International Offshore (BMIO) and its correspondent bank had broken down, the Central Bank of Seychelles (CBS) has announced that it has "taken control of BMIO effective today November 11, 2014".

According to a press statement issued by CBS this afternoon, the reserve bank has the right to take possession of a financial institution registered in the country “where it is of the opinion that the continuation of a bank’s activities is detrimental to the interests of its depositors” as stated in Paragraph 1, Schedule Three of the Financial Institutions Act of 2004.

BMIO underwent "an examination" by CBS officials as well as the Financial Intelligence Unit to determine the exact nature of the problem.

The Central Bank said its officials had also held talks with BMIO’s Board of Directors in order to resolve the issue.

“However, in view that BMIO has not been able to establish a new correspondent banking relationship to date, CBS has decided to take control of the bank. As such, the management and control of the affairs of BMIO is now temporarily vested with CBS,” said the statement.

The reserve bank says it will try to address the issues that are preventing the bank from re-establishing its correspondent banking relationship.

“Central Bank will now have a team that will lead BMIO’s operation which will be able to manage all the affairs of BMIO,” CBS’s First Deputy Governor Christophe Edmond told Seychelles Broadcasting Corporation's journalist Kevin Malbrook in an interview aired this evening on SBC.

The bank is based in the 'Capital City' building on Independence Avenue in central Victoria; the Seychelles capital.

Edmond told SBC that the bank’s staff (around 25 employees) needed to work together with the Central Bank now that it has taken possession of BMIO.

"The purpose that Central Bank has taken possession is to assist the bank if possible to go back on track….so it’s important that we get the cooperation of the staff it will be in their interest and the interest of the clients," he said.

Under the Financial Institutions Act of 2004, the Central Bank can choose to continue or discontinue the bank’s operations as it sees fit and also has the power to completely or partially suspend, limit or stop the payment of its obligations should it be deemed necessary.

But CBS has reassured the bank’s clients that the issue is “purely of an operational nature”, reiterating its claim that BMIO is financially sound and not threatened by its lack of correspondent bank.

The reserve bank has promised to provide further updates on the situation as they unfold.