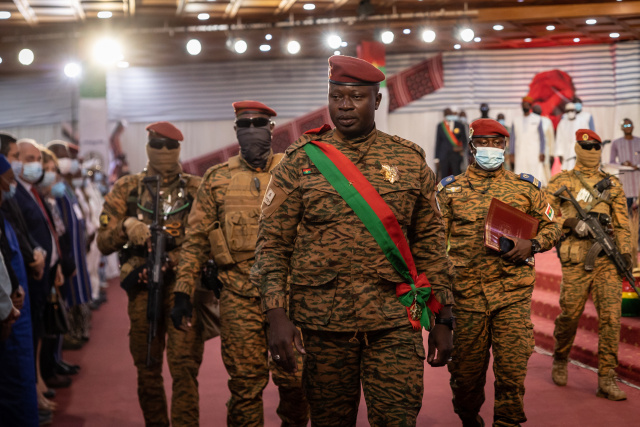 In this file photo taken on March 2, 2022 Lieutenant-Colonel Paul-Henri Sandaogo Damiba, President of Burkina Faso, arrives to his inauguration ceremony as President of Transition, in Ouagadougou. Military officers announced the removal from office of Burkina Faso's junta leader on September 30, 2022. The dismissal of Lieutenant-Colonel Paul-Henri Sandaogo Damiba, who came to power in a coup last January, was announced in a statement read out on national television.
(Photo by OLYMPIA DE MAISMONT / AFP)

"The chairperson calls upon the military to immediately and totally refrain from any acts of violence or threats to the civilian population, civil liberties, human rights," the AU said in a statement, calling for the restoration of the constitutional order by July 2024.

The dismissal of Lieutenant-Colonel Damiba, who himself came to power in a coup last January, was announced late Friday in a statement read out on national television.

The disgruntled officers also announced the closure of borders from midnight, as well as the suspension of the constitution and the dissolution of the government.

Faki said he was deeply concerned about the resurgence of unconstitutional ousters in the West African nation and elsewhere on the continent.

The coup is the latest bout of turmoil to strike Burkina Faso, a landlocked state that has suffered chronic instability since gaining independence from France in 1960.

The AU suspended the country on January 31 "until the restoration of constitutional order".

Africa has been hit by a spate of coups in recent years.