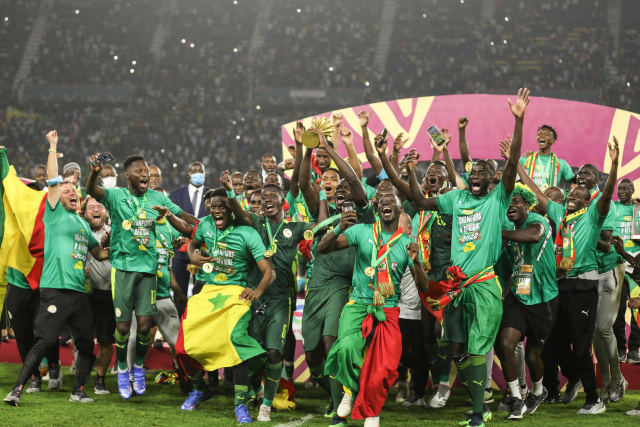 (FILE) Senegal players celebrate with the trophy after winning the 2021 Africa Cup of Nations final soccer match against Egypt at the Paul Biya 'Olembe' Stadium, Yaounde, Cameroon 06 February 2022. Guinea was on Friday stripped of hosting the 2025 Africa Cup of Nations because the infrastructure is not yet ready, the Confederation of African Football (CAF) President Patrice Motsepe announced in Conakry.(Photo by Ayman Aref/NurPhoto) (Photo by Ayman Aref / NurPhoto / NurPhoto via AFP)

(AFP) - Guinea was on Friday stripped of hosting the 2025 Africa Cup of Nations because the infrastructure is not yet ready, the Confederation of African Football (CAF) President Patrice Motsepe announced in Conakry.

"We are not ready as of yet in Guinea... and we should reopen the process" of allowing prospective host countries to bid, Motsepe said in a press conference.

Motsepe said CAF's decision was in fact taken in July.

"I had insisted that that message should not go public -- I should come personally here", he said.

CAF will hold an executive committee meeting on Saturday.

This is a just the latest setback for the continent's premier sporting event.

Then Egypt replaced Cameroon for 2019 with CAF shifting the calendar, awarding the 2021 edition to Cameroon, which was then held this year, and the 2023 edition to Ivory Coast.

Guinea had then agreed to organise the 2025 edition.

This is also a severe blow to Guinea. Colonel Mamady Doumbouya, who came to power in a coup in September 2021, had expressed his firm intention to honour the commitment to hosting.

The event was always going to be a major challenge for one of the world's poorest countries, which is sorely lacking in infrastructure, both in terms of sports facilities and transportation.

"Tomorrow CAF is going to be asked to receive new bids, because where we are now, the infrastructure and the facilities are not appropriate or ready," Motsepe added.

The CAF president was scheduled to meet with Doumbouya, Friday, according to a programme for the visit communicated by the Guinean federation.

Motsepe's visit followed one in early September by a CAF mission to check on the progress of the project.

That trip had given rise to speculation that CAF would remove Guinea as host or postpone the competition to 2026 or 2027.

Motsepe is due to hold a press conference in Algiers on Saturday after a meeting of CAF's executive committee.

In March, Doumbouya replaced the old organising committee, one of whose members had publicly expressed doubts about the feasibility of the project.

Doumbouya issued a decree declaring the 2025 African Cup of Nations "of national interest and priority".