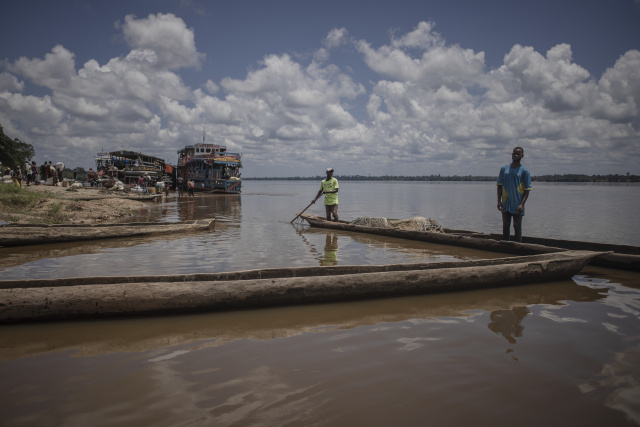 Fishermen return after a day of work in the Congo River a few kilometers from the city of Kisangani, Tshopo province, northeastern Democratic Republic of Congo on September 01, 2022. (Photo by Guerchom Ndebo / AFP)

(AFP) - Environment ministers from about 50 countries will gather in the Democratic Republic of Congo on Monday for a "pre-COP27" climate summit, with rich nations likely to come under pressure to raise spending to combat climate change.

The talks in the DRC's capital, Kinshasa, are informal but meant to allow various countries and green groups to take stock of political positions ahead of COP27 -- the United Nations climate gathering of world leaders in Egypt next month.

An opening ceremony will take place in the Congolese parliament building in Kinshasa, followed by discussions on mitigating climate change, and providing funding for countries already damaged by global heating and severe weather events.

Delegates from about 50 countries are expected to attend the talks, including United States climate envoy John Kerry.

"The emphasis will certainly be on support from industrialised countries to countries in the south," a Western diplomat recently told AFP.

The last UN climate summit, COP26 in Glasgow in November 2021, reaffirmed the goal -- agreed in Paris in 2015 -- of limiting the rise in the Earth's average temperature to well below 2.0 degrees Celsius above pre-industrial levels and pursuing efforts to limit it to 1.5C.

That goal may already be beyond reach as the Earth's temperature is already 1.2C higher than before the Industrial Revolution of the 19th century.

Poorer countries had pushed at Glasgow for a financial mechanism to address losses and damage caused by climate change.

But wealthier nations -- the largest polluters -- rejected the call and the participants agreed instead to start a "dialogue" on financial compensation for damages.

Egypt, which is hosting COP27, has made implementing the pledge to curb global heating the priority of the November summit.

Poorer countries are again likely to remind their richer counterparts of the need to increase financial support.

The latter have so far failed to deliver on their promise to provide $100 billion a year to help developing countries limit climate change.

Demands for climate justice were front and centre of a protest in Kinshasa last month, where young Congolese activists chanted slogans and demanded that world leaders take swift action rather than repeat old promises.

The Congolese government is also expected drive home the message that it requires funding to protect its vast rainforests, which act as a carbon sink.

Around 30 billion tonnes of carbon are stored across the Congo Basin, researchers estimated in a study for Nature in 2016. The figure is roughly equivalent to three years of global emissions.

However, the central African nation in July launched an auction for 30 oil and gas blocs, ignoring warnings from environmentalists that exploiting them could harm ecosystems and release vast amounts of heat-trapping gases.

One of the poorest countries in the world, the DRC argues that drilling for oil and gas could help diversify its economy and benefit the Congolese people.

Business » Be a reporter: Write and send your article » Subscribe for news alert