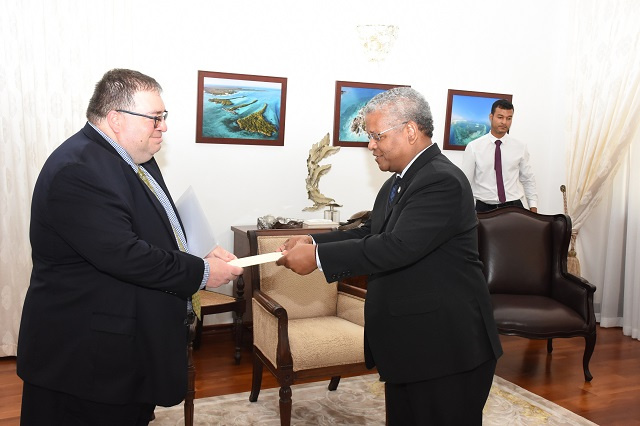 Seychelles and Cyprus will work together to have their voices heard on common issues such as climate change, said the newly accredited High Commissioner of Cyprus.

Andreas Nikolaides made the statement to reporters after presenting his credentials to President Wavel Ramkalawan at State House on Tuesday.

"Cyprus being a member of the European Union since 2004, opens new possibilities to broaden the horizon for operations between Cyprus and Seychelles," said Nikolaides.

Among the other areas discussed was that the two countries will work together on the Blue economy, climate change and maritime safety.

Although diplomatic relations between Seychelles and Cyprus were established on July 1, 1976, the historical link between the two countries goes as far back as March 1956 with the British government's deportation of Cypriot Orthodox Archbishop Makarios III to Seychelles, where he remained in exile for just over a year.

"I had a chance to thank President Ramkalawan for Seychelles' continued support during the times of military occupation of Cyprus," said the new high commissioner.

Nikolaides will be based in Oman.

The new Ambassador of Romania, Monica-Cecilia Sitaru, was also accredited on Tuesday.

After her meeting with the President, Sitaru said that the discussions were on ways "to diversify our bilateral cooperation and sectoral cooperation."

"We have talked about cooperation in the tourism field because there is a similarity between tourism in Romania and Seychelles – in the last year there has been an increase in the number of visitors from Seychelles to Romania," she said.

Diplomacy » Be a reporter: Write and send your article » Subscribe for news alert
Tags: European Union