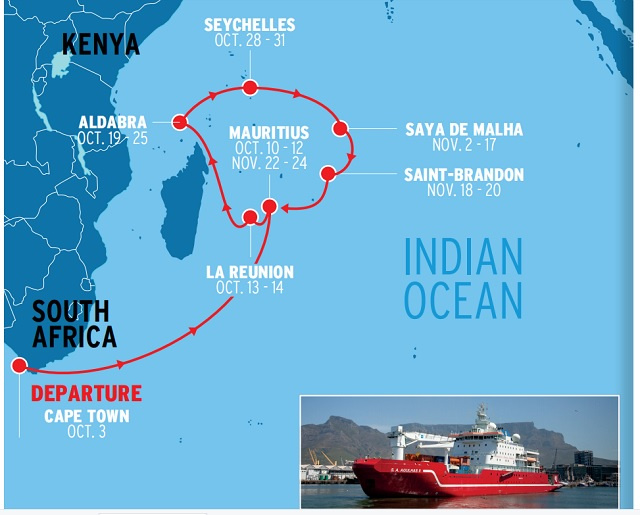 The S.A. Agulhas II vessel left l Cape Town on Monday and is on its way to the Western Indian Ocean. (Monaco Explorations)

(Seychelles News Agency) - The Monaco Explorations expedition in the western Indian Ocean on board the South African oceanographic and supply ship S.A. Agulhas II left Cape Town on Monday and is expected to reach Seychelles' Aldabra atoll on October 19.

Initiated by Prince Albert I of Monaco over a century ago and spearheaded now by his great-great-grandson Prince Albert II of Monaco, the expedition is first on its way to Mauritius and Reunion before heading to Seychelles.

The Monaco Explorations' local media mediator, Irene Du Preez, told SNA that "a total of about 100 people including scientists, young researchers and students from the onboard school, filmmakers and photographers and divers" will be part of the expedition."

The forthcoming expedition, which is part of the commitment of the Principality of Monaco to the international community for the protection and sustainable management of the ocean, will be at the Aldabra Atoll, one of Seychelles' UNESCO World Heritage sites, from October 19-25.

During the two months in the Western Indian Ocean, Monaco Explorations will carry out various research and fields around the Aldabra Atoll, on the Saya de Malha Bank and around the island of Saint Brandon.

"It will also focus on meeting the needs of the governments of Seychelles and Mauritius while also relating closely with relevant international and regional organs and initiatives," she told SNA.

The vessel sets sail with an initial group of 20 scientists and technicians who will later be joined by others in Mauritius and Reunion as it progresses.

While in Seychelles, there will also be interactions between students in the country as well as its scientists.

Du Preez said that this "latest edition of the expedition's project was endorsed as a contribution to the United Nations Decade of Ocean Sciences for Sustainable Development 2021-2030."

Seychelles, an archipelago in the Western Indian Ocean with an exclusive economic zone of 1.4 million square kilometres is seen as a champion of the Blue Economy.

General » Be a reporter: Write and send your article » Subscribe for news alert
Tags: Monaco Explorations