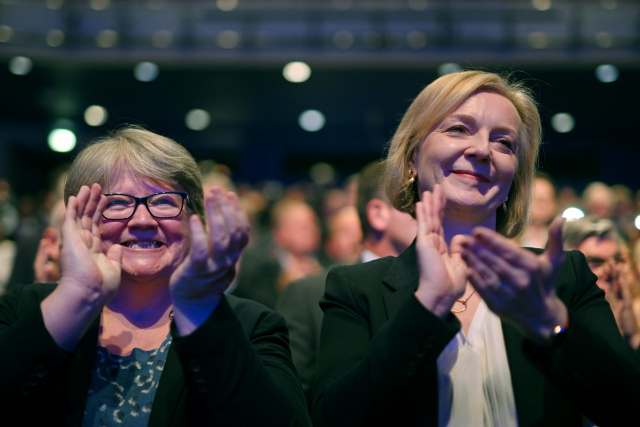 Just a month since she succeeded Boris Johnson, Truss has alienated voters, financial markets and many in the Conservative party with a crash programme of debt-fuelled tax cuts to revitalise growth.

Former minister Grant Shapps, who supported Truss's leadership rival Rishi Sunak, said she could face a no-confidence vote by MPs if her keynote speech to the Tory conference in Birmingham does not start reviving the party's dismal standing in opinion polls.

"In the end, I don't think members of parliament, Conservatives, if they see the polls continue as they are, are going to sit on their hands," he told Times Radio.

"A way would be found to make that change."

But in her speech, expected from 1005 GMT, Truss will argue that the status quo is not an option, according to a preview released by the party.

"The scale of the challenge is immense," she is to say, stressing Russia's invasion of Ukraine and the economic crisis in the wake of the Covid-19 pandemic.

"That is why in Britain we need to do things differently. Whenever there is change, there is disruption. Not everyone will be in favour.

"But everyone will benefit from the result -- a growing economy and a better future," she will say, vowing a "clear plan" to end the "high-tax, low-growth cycle".

Truss is set to defy critics, including allies of Johnson, who have accused her in Birmingham of lacking a national mandate for her unpopular reforms after she won the Tory leadership with the votes of 81,326 party members.

"We have huge talent across the country. We're not making enough of it. To deliver this, we need to get Britain moving," Truss is expected to say.

"We cannot have any more drift and delay at this vital time."

Whether the speech has the effect 10 Downing Street wants remains to be seen.

Truss is a wooden speaker, and her media interviews in the build-up to Wednesday have focussed unrelentingly on the U-turn she was forced to stage on a signature element of her reform overhaul.

Truss and Chancellor of the Exchequer Kwasi Kwarteng reversed course on their plan to cut income tax for the richest, as ordinary Britons suffer a painful cost-of-living crisis.

Cabinet splits emerged in Birmingham on indications that despite the impact of the crisis on the poor, the pair will next cut welfare benefits.

Truss denied that she had lost control of her cabinet after putting on a show of unity with the beleaguered Kwarteng on a visit Tuesday to a construction site in Birmingham.

"We are working with our MPs, this is a team, this Conservative team, putting forward our policies for the country and delivering for the country," she told ITV.

But there was little team spirit on display from Home Secretary Suella Braverman, who accused party critics of seeking to stage a "coup" against Truss.

Dissident ringleader Michael Gove was one of Braverman's targets. But he kept up his running criticism of Truss, stressing all Conservative MPs had been elected on Johnson's manifesto of 2019.

"We've got to keep faith with what Boris wanted," Gove said, underlining the point that Truss has yet to face the UK electorate herself.

But asked by reporters if Truss would survive beyond the end of the year, the former minister said: "Yes."

Opinion polls have shown the main opposition Labour party breaching 50 percent as the Tories slump under Truss, fraying nerves in Birmingham over the four days of the conference.

"Polls do move up and down," Kwarteng said Tuesday on the conference fringes, stressing the two years remaining to the next election was an "eternity in politics".

"I never predict victory, but I do think we can be very competitive and have a compelling story to tell."

Judith Donovan, a 71-year-old party member from Yorkshire in northern England, urged the rookie prime minister to "stick to her guns".