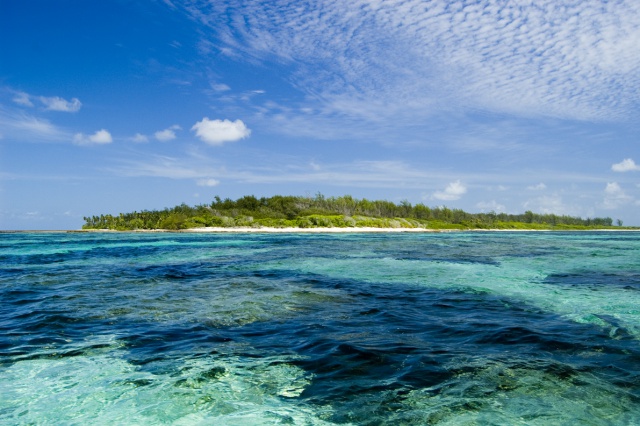 Desroches island in the Seychelles archipelago, one of the low-lying islands likely to be affected by climate change with sea-levels rising. (Gerard Larose, Seychelles Tourism Board)

(Seychelles News Agency) - Ministers from island members of the Alliance of Small Island States (AOSIS) are meeting in Seychelles this week to discuss their common position on the upcoming UN climate talks in Lima, Peru.

The meeting opened at Beau Vallon, a northern district of the main island of Mahé, this morning, which is seen as the last chance for over 39 small Island and low-lying coastal countries from all oceans and regions of the world to agree on a mutual stance ahead of the United Nations climate change meeting next month.

The delegates are expected to discuss,the latest findings released by the Intergovernmental Panel on Climate Change (IPCC) especially those with a particular focus on issues of significance to Small Island Developing States (SIDS), the status of each countries to ratify the Kyoto Protocol and status of different partnerships announced at the third UN conference on small island states held in Samoa in September.

During today’s meeting it was announced that the Maldives would chair AOSIS between 2015-2017 and that Seychelles would take up chairmanship between 2017-2019. For the last three years, the seat has been occupied by Nauru, a small island in the South Pacific.

Whilst opening the meeting, the head of state of the Indian Ocean islands of the Seychelles with a population of 90,000 people, President James Michel stated that all delegates ”“must also undertake a frank self-assessment”.

According to a press statement from State House, Michel said that most of the small islands states (SIDS) “are under-prepared for these negotiations”.

“We do not have armies of scientists, statisticians or economists to help us make our case. But we have something that is invaluable, something that is powerful: we are the conscience of these negotiations. We stand as the defenders of the moral rights of every citizen of our planet,” he said in the address.

Michel presented four points for AOSIS to consider ahead of the UN conference in Lima and Paris negotiations on climate change in 2015.

According to the press release, this includes the gathering funds under the  Green Climate Fund for adaptation and mitigation against climate change the “adoption of a vulnerability resilience index” to benefit those countries that are most in need of assistance, which is currently being developed by the European Union, the Commonwealth and UNDESA .

The statement said AOSIS need to ensure  “that action on climate change is taken in the immediate future”, and that “the priorities of SIDS are mainstreamed within the post 2015 Development Agenda.”

Michel called on AOSIS members to make themselves heard around the world to ensure that the climate change topic is integrated into negotiations on other development issues.

“Let us be heard on every beach and every roadside. Let us be heard in Beijing, in Delhi, in Johannesburg, in London, in Moscow, in New York, in Paris, in Rio …  Let us ensure that there is no discourse on security, on trade, on human rights, on development … unless we are also addressing climate change.”

Speaking to Seychelles Broadcasting Corporation this morning, Ronny Jumeau, the Seychelles ambassador for climate change and spokesperson for the Alliance of Small Island States (AOSIS), said that this last meeting will allow all the members to agree on a political stance ahead of the Lima talks.

The 2015 pact will seek to limit average global warming to two degrees Celsius in order to slow down the effects of global warming.

Whilst addressing the AOSIS meeting, the Minister for Education and Special Presidential Envoy for Climate Change of Nauru, Charmaine Scotty stated that the “problem of climate change will not be solved at the technical level. As politicians we need to create the space for our negotiators to manoeuvre”.

She pointed out that at AOSIS however the opposite seems to be the case with the technicians racing ahead of the politicians and warned that tactical disagreements can become retractable.

“We need to think realistically about how discussions are actually made in this process. We must be prepared to grapple with the politics we face, difficult though they maybe. Highlighting our vulnerability will not be enough. Being “right” about the science will not be enough. We must be ready to engage at the highest levels of government throughout the entirety of 2015,” said Scotty, before joining the Seychelles head of state in Victoria for a meeting at the State House.

The head of the Nauru delegation  also added that her country is feeling the effects of climate change and its people are finally realizing the impact that this may have on their way of life.

“No one wants their home to be lost forever. It’s important that the major emitters understand the danger of climate change to our security”, says Scotty, according to a State House press statement