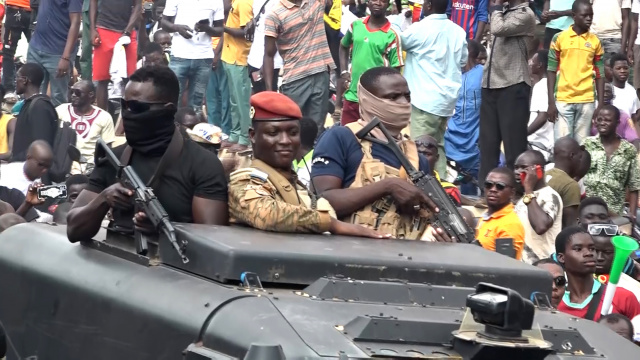 In this file video grab taken from a footage of AFPTV taken on October 02, 2022 the new self-proclaimed leader of the military junta ruling Burkina Faso, Captain Ibrahim Traoré (C), parades in the streets of Ouagadougou and hails the cheering crowd. Captain Ibrahim Traore was appointed as president of Burkina Faso on October 5, 2022, according to an official statement, after the West African country's second coup in less than nine months. Traore has been appointed as "Head of State, Supreme Head of the Armed Forces", according to the official statement read out on national television by spokesman Captain Kiswendsida Farouk Azaria Sorgho. (Photo by Idrissa OUEDRAOGO and Adama OUEDRAOGO / AFPTV / AFP)

(AFP) - Captain Ibrahim Traore was appointed as president of Burkina Faso on Wednesday, according to an official statement, after the West African country's second coup in less than nine months.

The impoverished Sahel nation plunged into renewed turmoil at the weekend when Lieutenant-Colonel Paul-Henri Sandaogo Damiba -- who had seized power in January -- was toppled by newly emerged rival Traore, leading a faction of disgruntled junior officers.

It was the latest putsch in the Sahel region much of which, like Burkina Faso, is battling a growing Islamist insurgency.

Traore has been appointed as "Head of State, Supreme Head of the Armed Forces", according to the official statement read out on national television by spokesman for the ruling junta Captain Kiswendsida Farouk Azaria Sorgho.

The statement said that Traore would now be the "guarantor of national independence, territorial integrity... and continuity of the State."

Damiba fled to Togo following the two-day standoff, which was defused by religious and community leaders.

Burkina is struggling with a seven-year-old jihadist campaign that has claimed thousands of lives, forced nearly two million people to flee their homes and left more than a third of the country outside government control.

Swelling anger within the armed forces prompted Damiba's coup against the elected president in January.

Appointing himself transitional head of state, Damiba had vowed to make security the country's top priority -- but after a brief lull the attacks revived, claiming hundreds of lives.

Delegates from the Economic Community of West African States (ECOWAS) wrapped up a fact-finding mission Tuesday and held meetings with religious and traditional leaders and Traore.

Traore said the ECOWAS visit was to "make contact with the new transition authorities" as part of the support that Burkina Faso derived from the region.

Speculation has risen that Burkina's new leader may follow other fragile regimes in French-speaking Africa and forge close ties with Moscow at the expense of France, the region's former colonial power and traditional ally.

The dramatic takeover coincided with violent anti-French protests and the sudden emergence of Russian flags among demonstrators.

On the streets, demonstrators' slogans included "France get out", "No to ECOWAS interference", and "Long live Russia-Burkina cooperation".

The United States has warned the junta of the risks of allying with Russia, saying they condemned "any attempt to exacerbate the current situation in Burkina Faso".

"We strongly encourage the new transitional government to adhere to the agreed-upon timeline for a return to a democratically elected, civilian-led government," a State Department spokesman said earlier this week.

Traore has previously said he would stand by a pledge that Damiba gave ECOWAS for restoring civilian rule by July 2024.