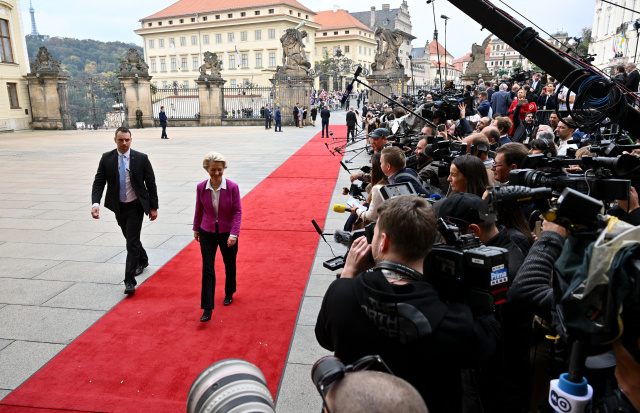 (AFP) - Britain and Turkey join EU counterparts on Thursday for an inaugural summit of the "European Political Community" aimed at bringing the continent together in the face of Russia's aggression.

The gathering in Prague -- a brainchild of French President Emmanuel Macron -- has been billed by Brussels as a "platform for political coordination" for the disparate 44 nations attending.

But there are deep disagreements -- and even open conflict -- among some of the participants and scepticism that the one-day event will turn out to be no more than a photo opportunity.

Russia, which is not invited, will loom over the meeting as discussions focus on the economic and security fallout from its war against its pro-Western neighbour.

Ukrainian President Volodymyr Zelensky -- currently overseeing a counter-offensive against Moscow's forces -- will connect via video link from Kyiv. His prime minister will stand in for him at the talks.

"Europe is facing its biggest crisis since the Second World War. And we have faced it together with unity and resolve," British Prime Minister Liz Truss is set to tell fellow leaders.

"We must continue to stand firm -- to ensure that Ukraine wins this war, but also to deal with the strategic challenges that it has exposed."

Despite the rhetoric there are expected to be few concrete results from the summit.

France has said it hopes to define potential room for cooperation among the leaders on protecting critical European infrastructure such as pipelines, cybersecurity and energy supplies.

EU officials expect to agree to hold a follow-up gathering of the community in six months' time in a country outside the bloc, with Britain and Moldova both offering to host.

While there are major questions over the usefulness of the enterprise, there will be a lot of activity on the sidelines as leaders hold bilateral talks.

"There will definitely be some hard, head-on exchanges," said one organiser.

The gathering has at least passed its first hurdle of convincing key European powers outside the EU to show up.

Truss, a fierce supporter of Britain's independent path since Brexit, will be there on one of her first major trips abroad after taking office.

London was wary about the event being dominated by the European Union and reportedly wanted to change the name from "community" to "forum".

Truss may be hoping for a respite from her woes at home after unleashing turmoil on Britain's economy. But she could face a tricky ride from EU counterparts over UK efforts to renegotiate the post-Brexit trade deal for Northern Ireland.

Her office said she will meet the French and Dutch leaders over the issue of illegal migration.

The presence of Turkish President Recep Tayyip Erdogan has also been a sore point for some.

EU members Greece and Cyprus have long-standing disputes with Ankara and the unpredictable Turkish leader is proving a headache for Sweden and Finland as a threat to their bids to join NATO.

Even more fraught could be the attendance of the leaders of Armenia and Azerbaijan, whose troops continue bloody clashes along their volatile frontier.

Armenia's prime minister has said he will meet Azerbaijan's president together with Macron and EU chief Charles Michel in Prague.

Those pushing to join the EU -- Ukraine, Georgia, Moldova and the Western Balkan nations -- might be expected to be more open to making the event a success.

But they too are on their guard about the format, worrying it could end up being a consolation prize where the EU can park their ambitions on membership.