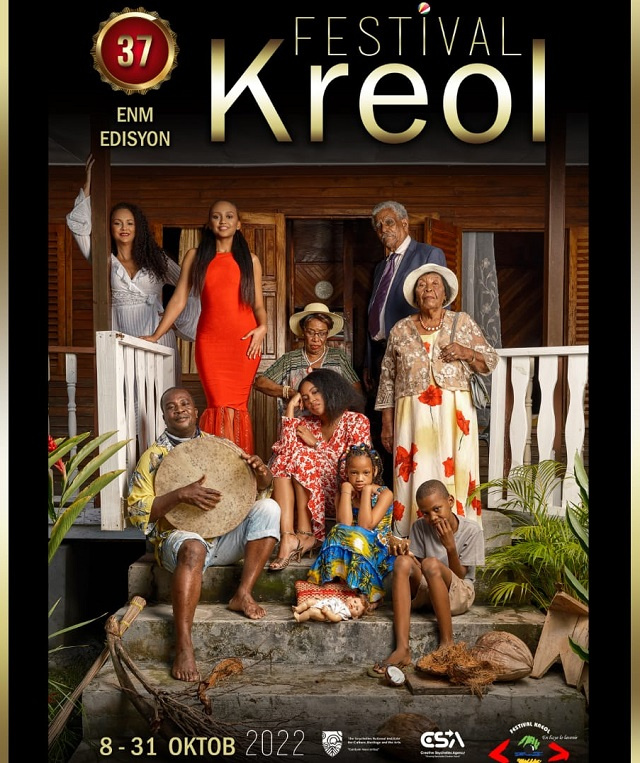 The poster for this year's edition was revealed at a press conference on Thursday. (Seychelles Institute of Culture and the Arts)

The 37th edition of the Creole Festival in Seychelles will be officially launched on Saturday, October 8, at the northern Mahe beach of Beau Vallon as part of a month-long series of activities.

Dubbed 'Lansman lasezon kreol' (launching of the Creole season) the event will include fishermen coming in with their nets and at 1.30 pm and they will be the ones to declare the official opening of the Creole Festival. It is an activity being organised by the Fondasyon Kiltirel Seselwa (Seychellois Cultural Foundation).

The poster for this year's edition and the calendar of events was revealed at a press conference on Thursday.

A member of the organising committee, Emmanuel D'Offay, said they want the Creole culture "to remain vibrant not only during the festival but throughout the year."

The Creole Festival held in the Seychelles archipelago in the western Indian Ocean is an annual celebration of the various aspects of the country's culture. Traditionally, it was held in the last week of October for the nation to celebrate its diversity, rich heritage and culture.

For the 37th edition, activities will be held over the month of October and these will include live shows in the capital, Victoria, and selling of typical Seychellois Creole food among others.

"We want the festival to be about celebrating the culture and everything that makes us Creoles," said D'Offay.

This year the only international participants in the festival will be those taking part in a virtual forum that is being held to talk about culture, heritage and art at the Internal Conference Centre in Victoria.

Other regular activities are still on the programme such as the Sware Kreative, a competition whereby school children showcase their performing arts talents, and the traditional Bal Bobes, a traditional dance ball.

The director for events, Margaret Raguin, said that "we have worked with the Ministry of Local Government and there will also be activities held on Praslin and La Digue as well."

A new addition will be the Lidantite Kreol (Creole identity) exhibition at the Natural History Museum and D'Offay said that "our challenge for artists is to portray themselves as Creoles."

He said that the festival is one of the events that has lasted for 37 years, through good and bad times and that "we have been able to deliver on the cultural duty that we have towards the Seychellois people."

However, the cultural authorities are re-evaluating the merits of holding the festival in its current format.

"Do we evolve, is the festival achieving its aims and objectives and is it bringing any benefits? These are questions we have to ask going forward," explained D'Offay.

He said that the Seychelles' capital has been dubbed the Creole capital of the world, however, for a few years now, it has not been showing that it is.

Taking into account that financing has been one of the main challenges in organising the festival this year, the principal secretary of the Seychelles Institute of Culture and the Arts (SINCHA), Cecile Kalebi, has appealed to sponsors to partner with them.