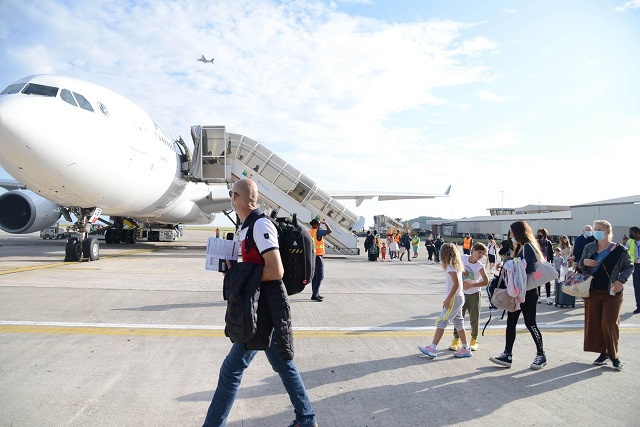 An Aeroflot A300 Airbus is expected to land at the Pointe Larue International Airport at around 11.25 a.m. (Tourism Seychelles)

Russia's national carrier, Aeroflot, will resume its direct flight services to Seychelles on Saturday, October 8, the Ministry of Transport said on Friday.

An Aeroflot A300 Airbus is expected to land at the Pointe Larue International Airport at around 11.25 a.m. after a joint decision made by the Ministry of Transport and the Seychelles Civil Aviation Authority.

"With the return of Aeroflot, we expect a further increase in the number of Russian tourists arriving in Seychelles to further contribute towards the local tourism sector and the economy in general. An increase in connectivity between the two countries will provide further opportunities for enhanced trade economic cooperation," the Russian Embassy told SNA on Friday.

The national carrier of Russia put on hold its flights to Seychelles on March 9 after the airline had issued a press statement saying that all international flights, except those with Minsk in Belarus, would be temporarily suspended as of March 8.

The airline was flying four times a week to Seychelles, an archipelago in the western Indian Ocean.

Aeroflot will resume flight services twice weekly and that will be on Tuesdays from Moscow arriving in Seychelles at 9.05 a.m and returning at 11.05 a.m. The other flight will be on Saturdays arriving at Pointe Larue International Airport at 11.25 a.m.

According to the Ministry of Transport, the resumption of Aeroflot flights to Seychelles "follows intense talks and negotiations with the International Civil Aviation Organisation (ICAO), Russia, and other stakeholders during the 41st session of the ICAO Assembly in Montreal, Canada. The flights are subject to requirements and must comply with ICAO conventions."

The announcement will be welcomed by the Seychelles' tourism ministry which is anticipating that once Aeroflot is back, its potential to increase its frequency on the Seychelles route would follow rapidly similarly to what happened in 2021.

In a previous interview, Bernadette Willemin, director general for destination marketing, told SNA that "we know that our destination is in high demand in Russia. In 2021, we had seen that as the availability of flights became more regular, we started seeing the different segments picking up. With the resumption of a direct flight between Moscow and Seychelles, we are expecting to see a notable boost in our visitors' arrival numbers from Russia and its neighboring regions."

When Aeroflot resumed its operations to Seychelles in April 2021 following a 17 years hiatus, Russia was the top tourism market, contributing 32,000 of Seychelles' total of 182,849 visitors.

According to the latest figures released by the National Bureau of Statistics on October 5, France leads the tourism arrivals to Seychelles with a total of 33,178 visitors, followed by Germany with 32,041 while Russia is third with 20,779.