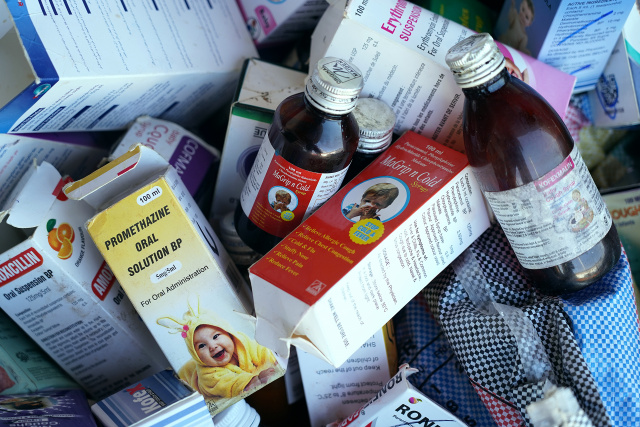 A photograph shows collected cough syrups in Banjul on October 06, 2022. Indian authorities are investigating cough syrups made by a local pharmaceutical company after the World Health Organisation said they could be responsible for the deaths of 66 children in The Gambia. (Photo by MILAN BERCKMANS / AFP)

(AFP) - President Adama Barrow on Friday promised The Gambia would boost health measures including better quality control over imported medicines after the mysterious death of dozens of children.

Barrow said 66 children had died in the past three months from acute kidney failure with fears that imported cough syrups are to blame.

The World Health Organization on Wednesday issued an alert over four cough and cold syrups made by Maiden Pharmaceuticals in India over possible links to the deaths.

Laboratory testing had found unacceptable levels of potentially life-threatening contaminants, the WHO said, adding that the products may have been distributed beyond the West African country.

Gambian health authorities had on September 23 ordered a recall of all medicines containing paracetamol or promethazine syrup.

In a statement, Barrow vowed officials would "get to the bottom" of the deaths and announced a raft of measures to avoid future tragedies.

He ordered the creation of "a quality control national laboratory for drugs and food safety" and an update to the nation's drugs-related laws to ensure regulation was up to scratch to prevent such incidences.

The government would "establish safeguards to eliminate the importation of sub-standard drugs", he said, while praising the work of the health ministry.

"Due to their timely intervention and the support of our partners, the outbreak is now under control, with only two cases reported in the last two weeks."

Barrow sought to reassure Gambians by noting that the child mortality figure was not substantially different from similar periods in the past, but added he was "deeply concerned about every death in the country".

"I assure you all that the government will leave no stone unturned to get to the bottom of this incident," the president said, as he urged citizens to be "vigilant".

General » Be a reporter: Write and send your article » Subscribe for news alert
Tags: Gambia, health