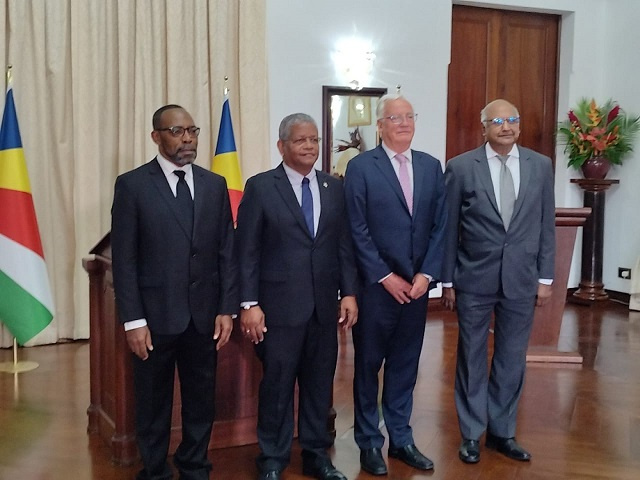 The justices of appeal that will hear the case of the Eastern European Engineering Limited (EEEL) against Vijay Construction were sworn in on Monday at State House.

Justices Winston Anderson, William Young and Carl Singh were officially sworn in to work on the case in the Court of Appeal of Seychelles.

They are expected to hear the case and come to a final determination in a case that has been heard in various courts both international and in Seychelles.

The first hearing is scheduled for October 12 at 10 a.m in the Court of Appeal.

The case pertains to the EEL hiring Vijay Construction to carry out construction work for Savoy Hotel in 2011 through six contracts.

Each of the six contracts which Vijay was hired under included similar arbitration clauses, which provided that any dispute, disagreement or claim would be settled by arbitration in Paris. The company filed a Request for Arbitration in September 2012 before the International Chamber of Commerce in Paris and received a sole arbitrator award in November 2014.

The costs to be incurred by Vijay Construction for breaking the contract were never paid partly because the award was not enforceable until Seychelles, an archipelago in the western Indian Ocean, became a party to the 1958 New York Convention earlier this year.

In November 2020, the Seychelles Constitutional Court dismissed the case of Vijay Construction against the EEEL on the grounds that the matter had already been dealt with before a competent court.

The ruling lets stand a $22 million judgement to be paid by Vijay to the EEEL.

In March 2021, the Court of Appeal awarded Vijay a temporary stay of execution which is to temporarily suspend the execution of a court judgment or other court order.

General » Be a reporter: Write and send your article » Subscribe for news alert
Tags: Court of Appeal of Seychelles