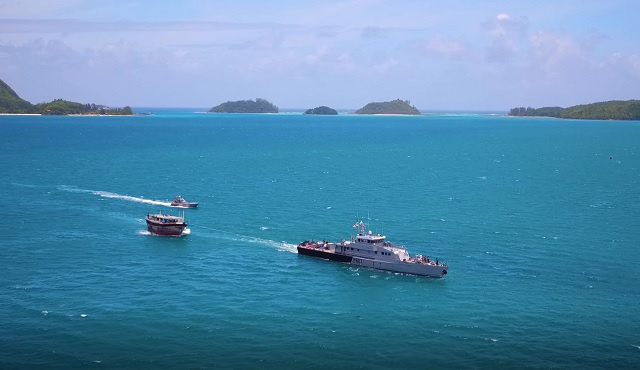 (Seychelles News Agency) - Eight Iranian nationals on board a dhow intercepted by the Seychelles Defence Forces in the island nation's waters have been remanded for 14 days by the Magistrates' Court, said the police.

The vessel, with the eight suspects aged between 20 to 42 years old, was detected by a Seychelles Air Force surveillance aircraft during a routine surveillance patrol and was intercepted by the Seychelles Coast Guard patrol ship Etoile on Friday, October 7. Packets of heroin were found onboard and seized, which some of the vessel's crew tried to throw overboard.

According to the police the suspects were handed over to them on Saturday after being escorted to Mahe, the main island.

In a press release from State House on Saturday, Seychelles' President Wavel Ramkalawan congratulated the Seychelles Defence Forces for a well-coordinated and successful mission.

"Despite the enormous risks and rough seas, you acted bravely and faced the challenge to complete the operation to intercept the Iranian dhow. You have destroyed an important consignment of heroin and in so doing protect our youth from this poison that is destroying families, relationships, and our nation. I salute your determination," said Ramkalawan.

He reminded the population that the fight against drugs remains a commitment of his government and made a special appeal to the population of Seychelles to be part of this fight in order for the country to win so that our children can live in a safer environment.

Meanwhile, the ongoing case of 11 Iranians involved in the biggest drug bust in Seychelles of 130.58 kilograms of cannabis resin will be back in the Supreme Court on Tuesday.

The Iranians were intercepted on a dhow outside Seychelles' Exclusive Economic zone on November 7, 2021, during a joint military operation by the Seychelles Coast Guard in collaboration with the Indian and French navies.