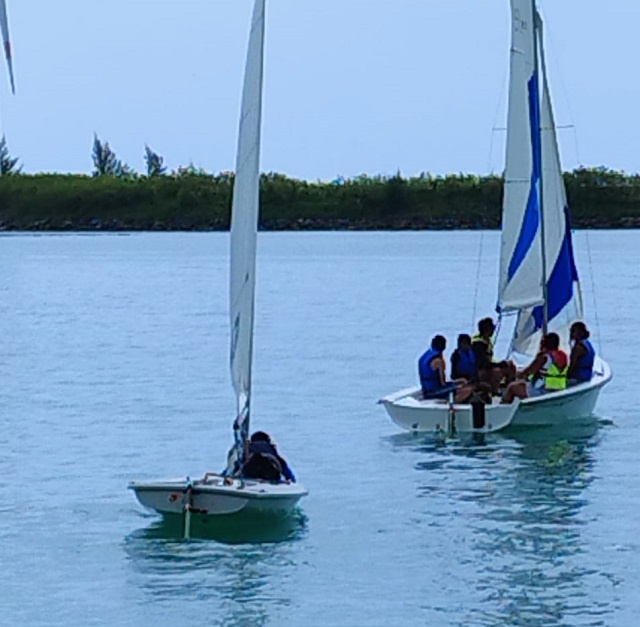 The event, which forms part of the World Sailing's global strategy to increase the number of women in sailing, took place on Sunday. (Sedrick Nicette, Seychelles News Agency)

With the aim to have more women participating in sailing, the Seychelles Yachting Association (SYA) held its annual Sailing Festival during the weekend under the theme of 'Women on Water - Fun in Sailing.'

The event, which forms part of the World Sailing's global strategy to increase the number of women in sailing, took place on Sunday, at the Sail's Training Scheme at Roche Caiman, the headquarters of the SYA.

"We have a lot of men and young boys in sailing, which is why we want to bring in more women to sailing," said Lucy Athanasius, the vice-chairperson of the SYA.

Supported by the International Olympic Committee (IOC) development fund, the festival aims to introduce women and girls across the globe to the sport of sailing, as well as encourage alternative pathways for those already within the sport, such as coaching or officiating.

Held over a 10-day period across two separate events - one in the Northern Hemisphere and the other in the Southern Hemisphere - the festival brings together sailing communities from all backgrounds, with events taking place in multiple countries at the same time.

"Today we want women to experience sailing and learn the fundamentals of the sport, in the hopes that they can eventually register with the association and hopefully create future women champions in the future," she added.

During the day, those present were able to try out sailing and canoeing and SYA hoped that more women will continue to be encouraged to take on the sport.

While setting sail on the shores of Seychelles' most populated island of Mahe was the highlight of the day's activities, participants saw a demonstration of how to make different knots. This is important in sailing and those present were also shown how to prepare their boats before taking them to the water.

According to Athanasius, while sailing is a sport, it also teaches a lot of valuable lessons, such as discipline and also how to take control of any situation, since you are on the boat by yourself.

She added that for the younger generation, sailing will also teach them some elements of science, including how to make sense of weather patterns, especially wind, which is an important part of the sport.

Water sports is an area where mostly men in Seychelles have shone at national and international levels.

In fact, the record holder for Seychelles' most prestigious individual award, the sportsman of the year trophy, is sailor Allan Julie, who won it six times.

Julie is also the only Seychellois who has qualified five times for the Olympic Games and his best result was a 20th overall finish in 2004 at the Athens Games in Greece.

Sport » Be a reporter: Write and send your article » Subscribe for news alert
Tags: International Olympic Committee, Women on Water