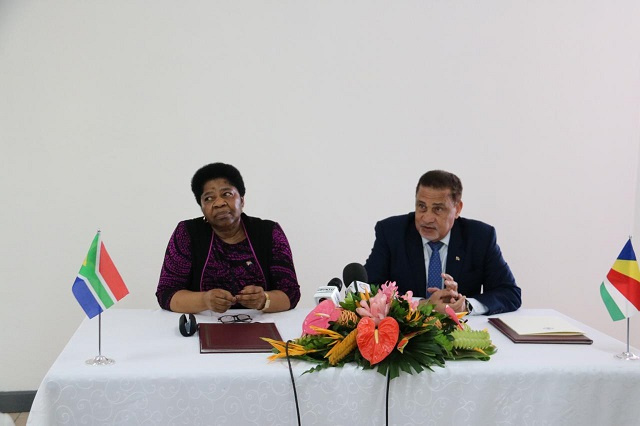 The meeting between the two countries was co-chaired by Radegonde and the South African Deputy Minister of International Relations and Cooperation, Candith Mashego-Dlamini. (Ministry of Foreign Affairs)

(Seychelles News Agency) - Seychelles and South Africa have identified new areas for cooperation and exchanges notably in the fields of youth and sports and innovation and technology, said a Seychellois top government official.

The statement was made by Seychelles' foreign affairs minister, Sylvestre Radegonde, at the end of the 3rd Ministerial Session of the Seychelles-South Africa Joint Commission of Cooperation (JCC) at Maison Quéau de Quincy on Friday.

"The relationship between our two countries holds greater promises for the future. A broader platform to harness the potential for stronger cooperation and exchanges in multifaceted areas has been firmly built," said Radegonde.

The meeting between the two countries on Friday co-chaired by Radegonde and the South African Deputy Minister of International Relations and Cooperation, Candith Mashego-Dlamini, was a continuation of a previous one held in July to assess progress made in the implementation of the agreed-upon work plans.

Seychelles, an archipelago in the western Indian Ocean, and South Africa established bilateral relations in 1992 and have had a Joint Commission of Cooperation since March 2018. Both countries are also members of the Commonwealth, the Southern African Development Community (SADC) and the African Union.

South African Deputy Minister of International Relations and Cooperation, Candith Mashego-Dlamini, who attended the bilateral meeting, said that the benefit for South Africa is to "learn how to manage a country and manage the politics for a better investment its economy as the Indian Ocean island state became a democracy before South Africa."

Other areas the two countries will be working closely together include health, tourism, civil aviation, education, defence, the police, immigration as well as arts, culture and heritage among others.

"Our meeting also underscored the desire of both countries to accelerate trade and investment and exchanges of expertise and best practices, with the view of unlocking the potential for further economic growth," said Radegonde.

The JCC is held every two years, with the mid-term review in between, and the next one will be held in Pretoria in 2024 just before elections are held in South Africa.

Diplomacy » Be a reporter: Write and send your article » Subscribe for news alert
Tags: Joint Commission of Cooperation