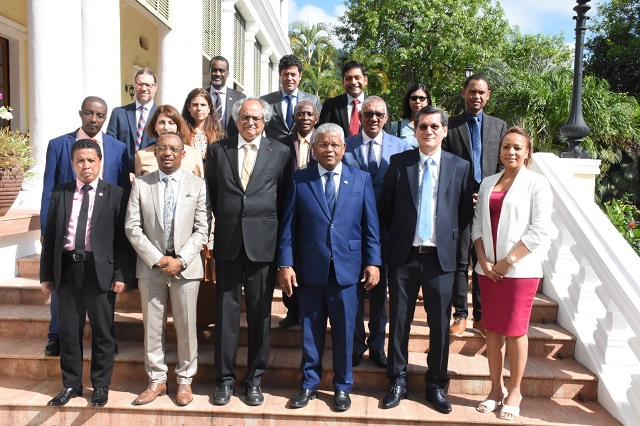 The first sharing platform for the election commissions of the Indian Ocean Commission (IOC) has been established through the signing of the Mahe Declaration by member states on Friday.

The historical signing at the headquarters of the Seychelles' Electoral Commission by the member states, namely Seychelles, Mauritius, Madagascar, and Comoros, took place after a two-day workshop.

The workshop was organised by the IOC as part of its 'Governance, Peace and Stability in Indian Ocean Region' project funded by the French Development Agency for a sum of €8 million over five years.

Speaking at the signing ceremony, the Secretary General of the IOC, Professor Vêlayoudom Marimoutou, stressed the importance of democracy, peace and stability for the region.

"The establishment of an Indian Ocean Electoral Network is indeed part of the strengthening of ties between our islands through the sharing of experiences, the exchange of expertise and a confident dialogue, at all levels, to promote peace and democratic cultures," said Marimoutou.

The objectives of the network are to promote the independence of the electoral commissions, electoral integrity and justice, transparency and inclusiveness of the electoral process, as well as the participation of women, youth, minorities and people with disabilities.

It will also promote studies and research on good practices related to elections, provide training for its members and facilitate international exposure of specific electoral issues in the Indian Ocean.

The President of the Mauritian Electoral Commission, Irfan Abdool Rahman, has been nominated as the present head of the Indian Ocean Electoral Network.

Rahman thanked the IOC for supporting the well-awaited project, which has a common objective for the region, and said that "the network will allow us to enhance our already strong historical and cultural relations, especially in the democratic and electoral area."

On the Seychelles side, the chair of the Electoral Commission, Danny Lucas, said the island nation can learn a lot from its counterparts.

"We have each been able to identify our strengths and weaknesses with regard to elections and this network will allow us to share our experiences and expertise to ensure the Indian Ocean becomes a region with the best electoral practices, and hopefully this could be extended to other countries in the Indian Ocean rim, and why not eventually globally," said Lucas.

Lucas said that the President "has assured us of his support and he wants all our islands to develop well and come out with good electoral practices so that peace and stability reign in our countries."

The Indian Ocean Electoral Network will now identify common activities to be developed over the next six months.